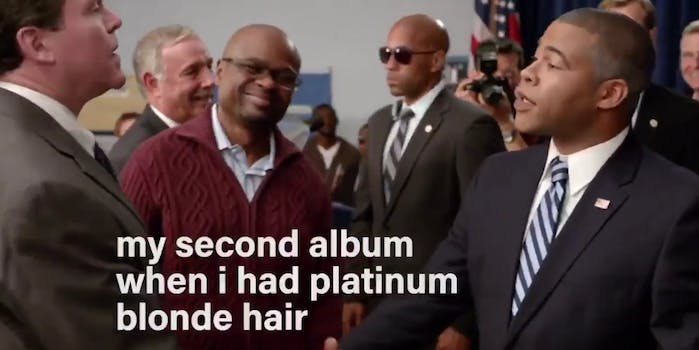 Katharine McPhee, the actor and singer who starred in SMASH after barely losing American Idol to Taylor Hicks in its fifth season, just created Twitter gold with her interpretation of a Key & Peele bit that’s become a fun meme.

Her clever shoutouts—not to mention those icy take-downs—mixed perfectly with the clever clip from Key & Peele. In the video, captioned “looking back at my career so far,” McPhee pokes fun at the American Idol judges, her platinum blond phase, and “that other movie I did where I was a Russian bride.” She also gives a big shoutout to all of her favorites. Kat Dennings, Emma Stone, and Anna Faris all get some love, along with Stephen Spielberg and her soon-to-be daughters-in-law Sara and Erin Foster.

looking back at my career so far pic.twitter.com/MgVB1U2esH

This is not the first time McPhee has blown us all away with her Twitter wit. In late August, she posted a picture of herself and Hicks just after his American Idol victory with the caption “voting matters” and a link where people could register.

McPhee’s glorious sense of self-deprecating humor finds a perfect home on Twitter, where her more than 250,000 followers can enjoy it. This excellent meme, which ends with just the right amount of shade thrown Hicks’ way, is just one more reason to love her.