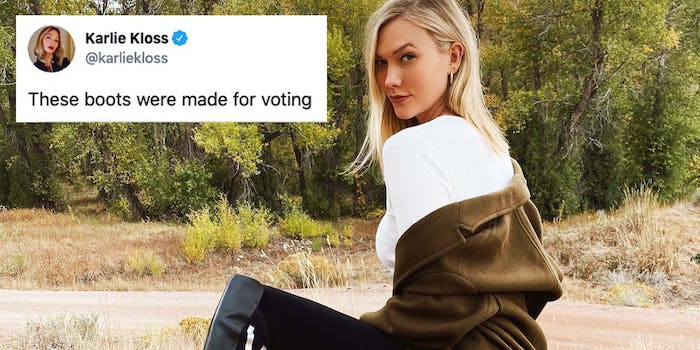 The ex-Victoria's Secret model is also getting mocked for urging people to vote via $700 boots.

Model-turned-tech entrepreneur Karlie Kloss inadvertently triggered the ire of the internet this week over a couple of voting-themed photos.

In the seemingly impromptu outdoor photoshoot, Kloss appears clad in black leggings, an olive-colored trench coat, and a pair of over-the-knee black boots that have the word “VOTE” emblazoned vertically up the calf. The 28-year-old is also seen wearing a tiny gold earring with the word “VOTE” spelled out in a closeup.

Though her message appears straightforward, the former Victoria’s Secret model is in an awkward position. Kloss got married to Joshua Kushner in 2018, the younger brother to Jared Kusher—personal advisor and son-in-law to President Donald Trump.

Despite the family ties, both Kloss and her husband have been outspoken that they did not vote for Trump in the 2016 election and do not plan to do so in 2020.

“I’m sure I’m not the only person in this country who does not necessarily agree with their family on politics,” explained Kloss in an appearance on Watch What Happens Live earlier in 2020. “I voted as a Democrat in 2016, and I plan to do the same thing in 2020.”

“It is no secret that liberal values have guided my life and that I have supported political leaders that share similar values,” Joshua Kushner likewise told Forbes in 2017. “But neither political party has a monopoly on the truth or on constructive ideas for our country. It’s important to be open-minded and learn from differing opinions.”

However, the Kushner brothers—and by extension, their famous wives—are reportedly still very close. And as the tweet went viral, people began reminding Kloss of what family she is literally in bed with.

“Funny that you don’t pick a side, you could just ask your brother/sister in law to do something to help the thousands of people dying,” one user tweeted. “Maybe also vocalize that people should vote them out?”

Others roasted the fact that Kloss is urging people to vote via her designer boots, which cost nearly $700.

There was also an overwhelming number of tweets making jokes about Kloss wearing her boots to “dinner with the Kushners.” The jokes were referencing a viral moment from a Project Runway episode in January 2020. In the episode, a contestant was charged with designing an outfit for Kloss to wear to a fashion event in Paris.

When another judge told the contestant he couldn’t see “Karlie wearing it anywhere,” he shot back, “Not even to dinner with the Kushners?”