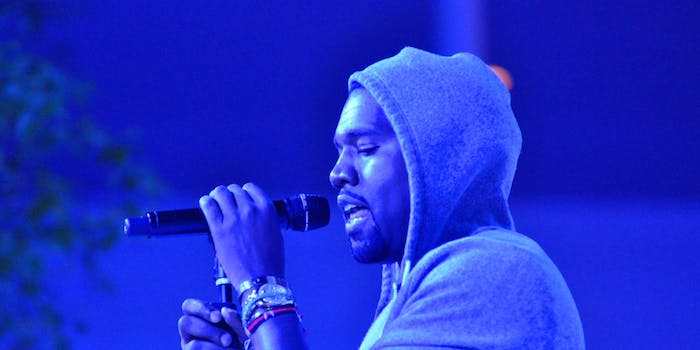 Say whatever you want about Kanye West but you can't deny his talent.

If Kanye West isn’t the most-despised man on the Internet, it’s not for a lack of haters. An online petition is demanding that he be barred from playing the closing ceremony of Toronto’s Pan American Games. So far, over 50,000 people have added their names to the list, with the deputy leader of Ontario’s Green Party even tweeting, “Really? This is quite a new low. Why anyone would want to see this obnoxious no talent a**hole is beyond me.”

Whether it was the fervor surrounding the Beck incident at this year’s Grammys, or the negative reaction to his heavily censored set at the Billboard Music Awards, 2015 has seen the Internet go after Kanye West harder than they have since that time he was chastised for mistakenly telling a fan in a wheelchair to stand up.

In March, Anonymous themselves went so far as to threaten him. “In all his recent activity, he has disappointed us all and uses negative publicity continuously to stay relevant on the Internet and attempts to build a profit with that attention,” someone allegedly affiliated with the hacker collective argued.

But regardless of your opinions about Kanye West, the idea that he’s simply a “talentless hack” or an “attention whore” is utterly ridiculous. Say whatever you want about him, but you cannot say he isn’t talented.

In addition to receiving accolades such as a place on the latest Time 100 list, West’s honors in music are staggering. With 21 statues, he is the most Grammy-awarded artist in his age bracket. In 2012, Rolling Stone included three of his releases on their top 500 albums of all time. On Metacritic, 2011’s My Beautiful Dark Twisted Fantasy currently stands as the eighth most-acclaimed album of the new millennium.

If Kanye West isn’t the most-despised man on the Internet, it’s not for a lack of haters.

And West’s larger output has continued to be almost universally praised by critics, with the cumulative reviews of his catalog averaging an 80 on Metacritic—higher than that of many fellow critics’ darlings like Radiohead.

If that wasn’t enough, he has also topped the Village Voice’s prestigious Pazz & Jop poll four times. The poll is a yearly round-up of Top 10 and Best Of lists from critics all over the country, and West is actually tied with Bob Dylan for the most wins, despite the fact that he’s only released six albums. This fact isn’t just astonishing—it also puts him in the company of industry legends like  The Who, The Clash, Michael Jackson, Bruce Springsteen, Prince, Nirvana, and fittingly enough, Beck.

Even with all of that pedigree, however, we still can’t leave Kanye West alone. There is now an odd disconnect between the reality of his abilities as a musician and his reputation as nothing more than tabloid sensation.

Consider another petition demanding that he not be allowed to play at the Glastonbury festival in England, which called him “an insult to music fans all over the world.” West played the fest anyway, and festival co-organizer Emily Eavis was forced to defend the decision to invite him. Calling West “one of the greatest artists of his generation,” Eavis also reminded everybody that Glastonbury regular Lou Reed once gave him a huge endorsement. “The guy really, really, really is talented,” the late musician once wrote. “He’s really trying to raise the bar. No one’s near doing what he’s doing, it’s not even on the same planet.”

However, a shout-out from a rock legend wasn’t enough to save his Glastonbury appearance. The Who took issue with his boastful behavior, while comedian Lee Nelson interrupted his set—referencing the time West interrupted Taylor Swift. This is despite the fact that West and Swift now seem to have squashed whatever beef they once had. And despite earning rave reviews from critics, the Internet narrative largely focused on the fact that he couldn’t sing “Bohemian Rhapsody” as well as Freddie Mercury.

It’s this kind of willful distortion of West’s talent has has come to define his public persona. Take another recent incident of West-bashing, wherein singer Corey Taylor, of the band Slipknot, took issue with West’s claim that he is “the greatest living rock star,” while criticizing the rapper’s awards wins: “Getting a Grammy is like getting a Teen Choice Award.”

Taylor said, “If you’re gonna tell me (that) with Keith Richards still alive, with David Bowie still alive, with Paul McCartney still alive that there’s even a comparison to Kanye West, then you just need to shut up and never try to say anything smart ever again.”

By contrasting West with these other musicians, he actually proves himself wrong. Paul McCartney himself worked with Kanye West on Rihanna’s “FourFiveSeconds,” praising his songwriting ability as akin to John Lennon’s. The underlying message should be that talented people want to work with talented people. It’s unlikely West would continue to entice such impressive artists—which most recently included Oscar-winning director Steve McQueen—to work with him if they did not feel he had something to offer in return.

If Kanye is “arguably the most critically beloved pop artist of the 21st century so far,” as the Guardian’s Ben Westhoff recently wrote, why do we continue to invalidate his artistry? “When you’re rich and on top of the world, you start peeing on people, or molesting them, or killing them, or killing yourself,” Westhoff said. “But what’s truly crazy is that Kanye hasn’t done any of those things.”

And that’s the true paradox of Kanye West. Unlike, say, The Who’s Pete Townshend, he’s never been so much as accused of anything truly evil, though people treat him like he has. All he’s really done is make great music and brag about it. “He believes himself to be the best and won’t rest until everyone agrees,” asserts Westhoff. “Another artist might have toned things down. But West not only needs to be cherished, he needs to be cherished on his own terms.”

It’s this kind of willful distortion of West’s talent has has come to define his public persona.

Just as the attacks on wife Kim Kardashian are often thinly veiled evidence of sexism masked as celebrity critique, these rockist efforts to discredit Kanye West are tantamount to racist tantrums from white people who refuse to accept a powerful, confident black man who be silenced by his detractors. Arguably, they just make him work even harder.

This makes his refusal to back down important: West’s braggadocio remains about black self-love and creativity in the face of traditionally white institutions—like rock n’ roll. That’s why—when West says he’s the greatest rock star on the planet—it’s not just about his larger than life presence, it’s about reclaiming music for black artists.

The reason he doesn’t get credit for it, however, is that his conception of social justice does not extend farther than his own interests. That doesn’t make his mission any less important, although for many, it does make it harder to understand. Pitchfork’s Julian Kimble once called him “more [a] glorious anti-hero than [an] activist.” Kimble wrote, “[H]is war is a vigilante mission against those trying to disparage ‘black people with ideas.’”

The idea that Kanye West’s music isn’t up to par is not only stupid and rockist but totally at odds with the opinions of every major music publication of the last decade—no one else even comes close to the same amount of acclaim. He’s a legitimate contender for artist of the decade and the greatest rapper of all time, and if his career so far is any indication, history will be talking about his legacy in pop music for years to come—not that he really needs anyone’s endorsement but his own.

Photo via Jason Persse/Flickr (CC BY 2.0)