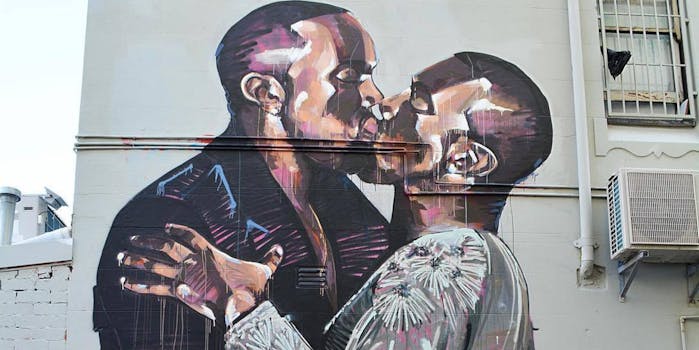 Did Kanye West pay $100K to destroy this mural of two Kanyes making out?

I miss the old mural.

Kanye West‘s self-infatuation has become such a punchline that he lampshaded it on his latest album with a track called “I Love Kanye.” But if that was a sign that he can take a joke, here’s a sign that he still can’t: West’s management reportedly paid an artist $100,000 to buff a mural of Kanye kissing Kanye.

The BBC confirmed that the mural has been erased, but takes only Marsh’s word about the $100,000 payday.

But who really paid the money, wonders skeptic Nicole Silverberg at GQ? Kanye hasn’t commented, so it could be anyone. Martin Shkreli? He allegedly paid millions for a fake leak of Kanye’s The Life of Pablo, so why not?

I’ll go one step further and suggest that maybe no one paid the money, making this the perfect stunt. A good deception draws the audience in on a string of easily believable facts, and we’ve got a few here. Point A: Someone on Reddit claimed Kanye wanted the original Kanye Loves Kanye Photoshop deleted, and a lot of people believed it. Point B: Marsh really did offer on his website to paint over the mural for $100,000.

It’s not hard, either, to accept point C: that Kanye’s ego would drive him to erase public art in which he sensuously feels up his own doppelgänger.

But consider some counter-evidence: Kanye is not one to do something audacious and not tweet about it. Plus, as GQ points out, giving up a mural is a small price to pay for the publicity and caché that comes with the public thinking you’ve got six figures to destroy your own image.

Especially given that Scott Marsh told Life Without Andy that he was getting tired of being pigeonholed as “the rapper guy” after his Kanye work and another notable mural of The Notorious B.I.G. this seems like a convenient way out, non?

On the other hand, maybe Marsh is telling the truth. When it comes to Kanye, Occam’s Razor may not apply.