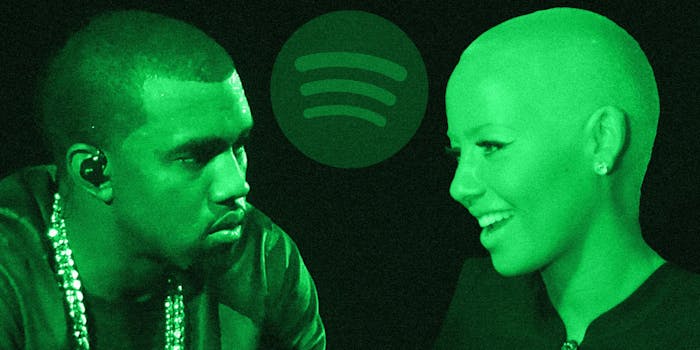 The definitive #KanyeAnalPlaylist is here

The Kanye West tweetstorm is the gift that keeps on giving.

Earlier this week, Kanye practically screamed at Wiz Khalifa on Twitter after he thought the “Black and Yellow” artist was dissing Kim Kardashian. Turns out, Wiz was not talking smack about Kanye’s bae, but it was already too late. Kanye ended up bringing Amber Rose into the situation, who then clapbacked so hard that the whole Internet practically shook.

Awww @kanyewest are u mad I'm not around to play in ur asshole anymore? #FingersInTheBootyAssBitch☝

But Kanye decided that he still wanted to fight, even after deleting all of his initial tweets. Late Thursday night, he wanted to clarify a couple of things about the alleged ass play.

Expectedly, Twitter erupted into another explosion of reactions. People have pointed out that Kanye shouldn’t be ashamed about trying to get his prostate tickled. And somehow, #KanyeAnalPlaylist started trending.

Masculinity so fragile. Every dude has a g-spot in their ass, don't be ashamed @kanyewest xoxo

Surely there’s lots of people screaming at their computer “delete this” after seeing the hashtag, but many have also contributed song suggestions to what would be included in this playlist. We’ve put some of the best ones into a handy, dandy Spotify playlist.

Where will this story go next? We’re not sure. But at least we have these jams to listen to while we eagerly await.