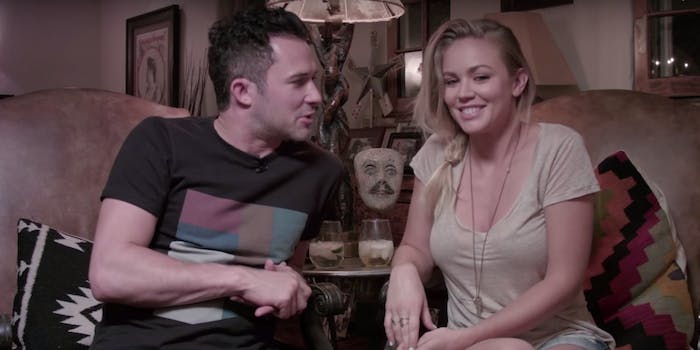 It's just as boozy as the show itself.

One couple got downright boozy when they told their loved ones how they met at their rehearsal dinner.

Comedian and magician Justin Willman (who also hosted Cupcake Wars) and Jillian Sipkins don’t have a typically cute story about how they met and fell in love with each other, but they were also tired of having to tell that story over and over again. Inspired by one of their favorite shows, Drunk History, Willman and Sipkins drank a bottle of whiskey, two bottles of wine, and half a bottle of vodka back in April to get completely wasted for the occasion.

Not only did they narrate their own story—which includes some missed connections at big events and a reunion after Coachella when he commented on an Instagram photo—they acted it out as well. It’s over-the-top, but it’s not too obnoxious and a refreshing take on a romantic tale. Get these two on Drunk History stat.

“It went over better than we ever expected,” Willman told BuzzFeed News. “Even Grandma, who we were worried wouldn’t get it, was raving.”

Willman and Sipkins got married over the weekend, where they were entertaining their friends and family even more.