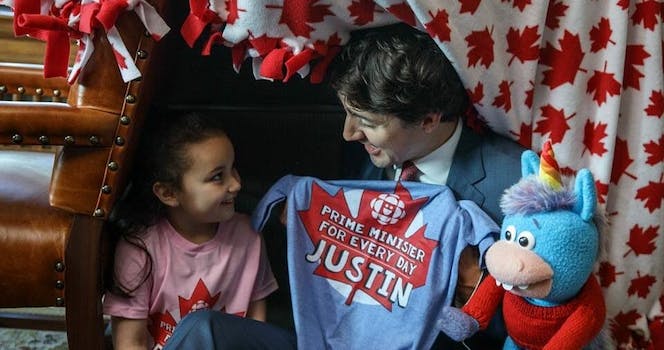 He had his maple leaf blanket ready.

If you’re one of the many, many people with a crush on Canadian prime minister Justin Trudeau, prepare to have your heart melted even further. Last week, Trudeau met 5-year-old Bella, the winner of a “PM for a Day” contest, and they turned his office couch into a blanket fort. Sure, it’s kind of a PR play for the PM, but it’s a really cute one.

What happens when a 5-year-old gets to be prime minister for the day?Pillow fort! …We were in Ottawa yesterday…

Of course, your Canadian MCM keeps a maple leaf blanket in his office for any emergency forts he might need to build. Why would we expect anything less?

Prime Minister Bella, who hails from Manitoba, was chosen by CBC Kids after running on a platform of expanded social programs and also hugs.

The CBC plans to air a special about her day as Canada’s littlest prime minister on July 1.