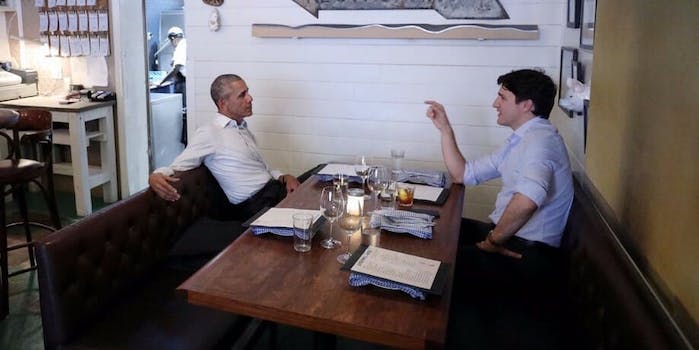 These two are all the heart eyes emoji.

Barack Obama‘s post-presidency global tour finally took him to our neighbor up north, where last night he sat down for dinner with Canadian prime minister and viral hits factory Justin Trudeau. Now, these two are no strangers to Twitter’s adoration of them, so Trudeau must have known that the second he dropped this shot of him and Obama casually enjoying an evening meal in Montreal, the like button was gonna be smashed.

How do we get young leaders to take action in their communities? Thanks @BarackObama for your visit & insights tonight in my hometown. pic.twitter.com/EwJXPEkN3w

As was pointed out, they knew what was up. They knew.

But they maybe had no idea just how much the internet would go for it.

I am this little piggy. pic.twitter.com/JoCnh0pShW

One day, all of this will be over and Trudeau, the Obamas & Macron can travel the world doing good deeds and solving crimes. https://t.co/DKbIHPLyMA

^ 'Memories, light the corners of my mind
Misty water-colored memories, of the way we were' pic.twitter.com/5sBsG196sN

As with anything on Twitter these days, some pointed out that it could be construed as shade toward the current president.

President Trump has not tweeted about date night—yet. But one Twitter user noted it appeared he was there.

Oh look Trump was there too. pic.twitter.com/j2qstkizOl