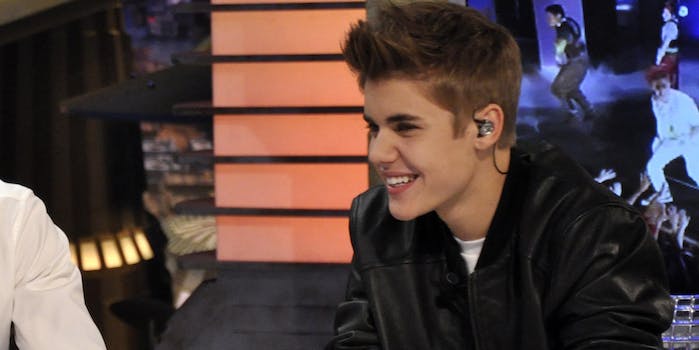 The camera rotates to show the girl who’s filming. She grins, blows a kiss. Who is she?

The short clip shows Justin Bieber passed out in bed. It’s gotta be him. You can see his tattoos; he’s in his wife-beater and lying next to a baseball cap.

Then the camera rotates to show the girl who’s filming. She grins, blows a kiss. She pans back over to Bieber.

Following week-long rumors that Justin Bieber visited brothels while on tour in South America, this video makes a compelling case that he’s not the innocent teen dreamboat YouTube fell in love with.

Reddit’s r/videos tracked down a Paraguayan model named Gaby del Campo, who tweeted the following image five hours before the video showed up on YouTube.

Thanks @justinbieber for the fresh dolla bills pic.twitter.com/GIP9FwbQrL

Blogger Perez Hilton believes the woman could be Tati Neves of Brazil.

The only thing certain about this Bieber drama is that he was in Asunción, Paraguay, Wednesday for a performance following a show in Brazil the day before.

Obrigado Brazil!!! Paraguay is next. #BelieveTour

His South American jaunt has been rife with controversy. The 19-year-old singer was accused of visiting a Brazilian brothel and bringing prostitutes back to his hotel room.

Considering Bieber is a consenting adult on tour in countries where prostitution is legal (at least in Brazil and Paraguay), who really cares? Bieber hasn’t been that cute little mop-topped YouTube kid in years (just check out him stuffing a fans phone down his pants, baring his butt on Instagram, and [allegedly] firing up a spliff). And chances are, this entire video could just be another hoax by late-night talk-show host Jimmy Kimmel, who fooled the world into believing this infamous twerking-fail video.

Hey, look at Kimmel. Then look at the girl in the video. Imagine Kimmel in a wig. (At least one redditor did.)

We won’t know until we see the extended cut.

Justin had rented a home outside of Rio to stay at during his concert in Brazil. After his show, JB threw an after-party and invited roughly 50 people. At some point during the shindig, Justin fell asleep on a couch and one of the partygoers shot footage of the singer sleeping.

Bieber is telling friends … he is completely creeped out by the video and is disappointed that he now has to defend himself against false hooker claims.