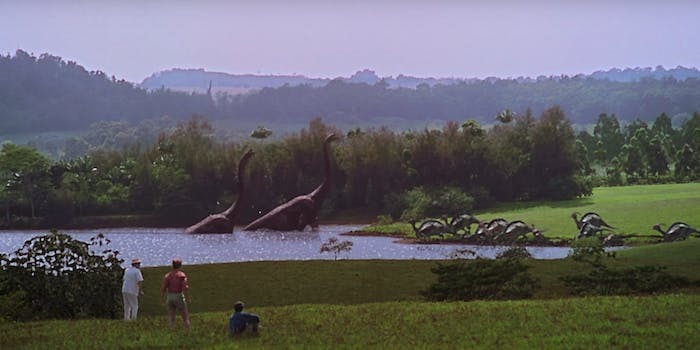 While universally beloved and an innovative feat when it first came out, Jurassic Park was also a film clearly ahead of its time. We’re almost constantly on the edge about the potential of bringing dinosaurs back to life—something that the Jurassic Park franchise showed us is an absolutely terrible idea—but it also seemed to uncannily predict just how theme parks would respond to the idea of reopening a park when it’s still unsafe to do so.

Fortunately, Jurassic Park Updates, a recently created parody Twitter which provides updates from within Jurassic Park for visitors, gives us the best of both worlds. Run by a group of comedians, it imagines not only a world where Jurassic Park exists but also one in which it’s attempting to run smoothly in the midst of a pandemic. Needless to say, it doesn’t go according to plan.

There’s an air of “Everything is fine!” and carelessness toward guests in every tweet, that the ability to carry on as if nothing is wrong with a bunch of dinosaurs running around a theme park won’t affect a pandemic reopening—nor will the coronavirus affect a theme park filled with dinosaurs.

The thing is, as absurd (and often hilarious) many of the tweets are, some of them have a basis in how actual theme parks are attempting to reopen. Earlier this week, a Japanese theme park asked people riding on roller coasters to “Please scream inside your heart” so as to not spread the coronavirus. Despite record cases, Walt Disney World is still planning to start reopening its parks this weekend in Orlando, Florida.

In Disney’s case, it tried to assure guests that their safety is Disney’s priority with a welcome back video that felt like something out of a dystopian movie. It was more unnerving than comforting, especially with reports that Disney is allegedly retaliating against the Actors’ Equity Association for demanding that it test staff before returning to work at Disney World. And as more theme parks decide to reopen (particularly in states with rising cases of COVID-19), we might very well see that the Jurassic Park Updates account, which has already amassed more than 115,000 followers, is actually underestimating how real theme parks will react.