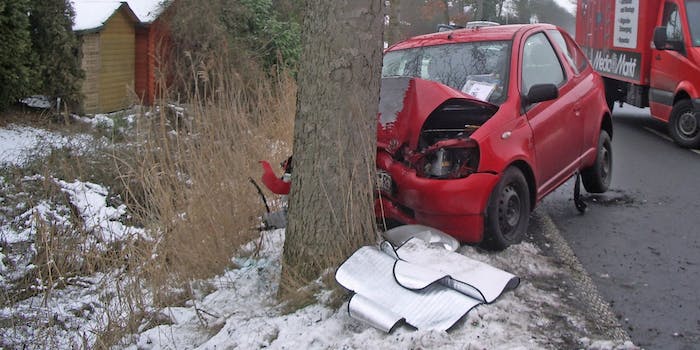 How is this still happening?

Warning: This article may be NSFW.

A Kentucky fire chief is coming under heavy criticism after footage obtained by a local news organisation shows him using racial slurs and refusing to help black motorists—as well as acting in an apparently racist manner towards one of their reporters.

WDRB had been initially investigating “mismanagement within a local fire department,” they report, when the got their hands on video that showed far more troubling issues. Footage from a Sheriff deputy’s body camera when responding to a traffic accident revealed a stark disparity in the way Southeast Bullitt County Fire Chief Julius Hatfield responds to two parties of motorists in need of assistance—one white, and one black.

The first (white) motorist is Loren Dicken—to whom Hatfield goes above and beyond the call of duty to help. He has his team change the Dicken’s tire to “save you a bill,”and went so far as to pick him up from the hospital once he was discharged and take him back to his car, which they stored at the firehouse.

In stark contrast, no assistance is offered to the family of the (black) driver Chege Mwangi, and they’re advised to call the AAA. But the most telling detail is when a a deputy tells Hatfield via radio that he’s “got a family of four from Cincinnati, I got to do something with.”

(The term is bleeped out in the footage but WDRB confirms it is a racial expletive.)

Mwangi subsequently told WDRB that he “didn’t think anything of [the lack of help] because his family wasn’t injured,” and that “he mostly dealt with the Bullitt County Sheriff’s Department, which was helpful.”

The second incident came more recently: When WDRB reporter Alerie Chinn confronted Hatfield in Nov. 2014 over “financial mismanagement and empty firehouses,” Hatfield questioned whether the Asian-American journalist could speak English, and threatened to have her arrested.

“Do you understand English, darling,” he asks—before telling a colleague to “call the cops and get them here” after the WDRB news crew refused to stop filming.

WDRB reports that Hatfield claims not to remember the incident in September, but says that “sometimes there is a slip of the tongue.” He has apologized to Chinn over his remarks in November.

This isn’t the first time Julius Hatfield has been in the news for the wrong reasons: In Feb. 2014 the fire chief made headlines after being ordered to repay training pay after allegedly “falsifying training records” and skipping meetings.