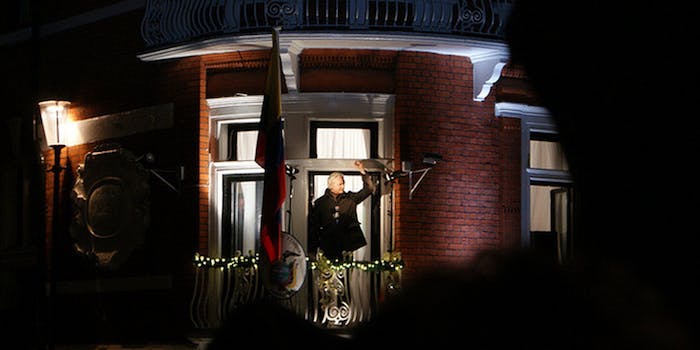 Julian Assange has been inside for a year

One year down, potentially four more to go for the notorious WikiLeaks founder.

Tuesday marked Julian Assange’s 365th day at the Ecuadorian embassy in Knightsbridge, London. Today, June 19, is the anniversary of his arrival.

Uninterested in facing U.S. justice, Assange said he’s prepared to spend five years living there. If he goes out for a walk, he’ll be extradited to Sweden to answer rape accusations—after which he has no promise from Sweden to deny further extradition efforts to America, where a grand jury investigation into WikiLeaks awaits.

This also means that London’s Metropolitan Police have been devoting their resources to keeping tabs on Assange for a year. Yesterday, a spokesperson explained the updated costs of guarding the embassy over the phone:

Julian has a treadmill, a SAD lamp, and a connection to the Internet, through which he’s been publishing small leaks and conducting interviews. The indoor lifestyle has taken its toll on Julian, and it led to his contracting a chronic lung condition last fall.

“A sad occasion that Julian could not follow me out the door,” filmmaker Oliver Stone tweeted after he visited Assange earlier this year. “He lives in a tiny room with great modesty and discipline… ” One of several public figures that have rallied behind Assange, Stone’s support was little surprise.

Of course, it’s impossible to discuss Assange’s solitary year at the embassy without considering the confinement of the man whose secrets he helped leak. It’s a sort of absurdist parallel narrative to the trial of Pfc. Bradley Manning. The two figures are inextricably linked, and together, their saga reads like Miltonic poetry. Or a blockbuster film.