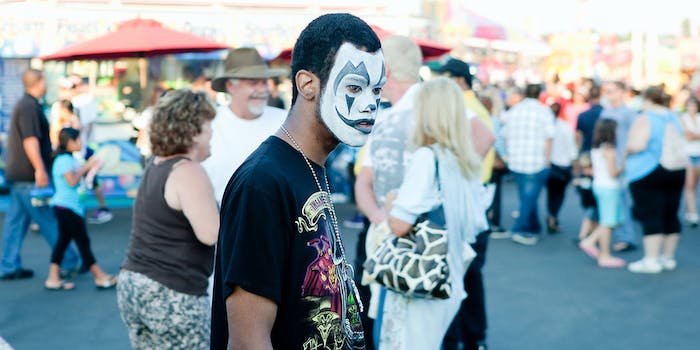 Sometimes it's tough when you're down with the clown. Luckily, there's JuggaloBook, connecting Insane Clown Posse fans since 2008.

Devout fans of the Insane Clown Posse rap duo, also called Juggalos, are frequently derided and misunderstood. The FBI even classified the fanbase as a violent gang in a 2011 threat assessment.

Luckily, there’s a place online where Juggalos can commiserate and seek solace from the rest of the world’s judgemental eyes. The Insane Clown Posse community has JuggaloBook, a Facebook clone dedicated to the subculture.

For Juggalos, this is no surprise. TopJuggaloSites.com already ranks JuggaloBook as No. 1. But the mainstream press has belatedly discovered the site, which they’re treating as some newly launched curiosity.

Juggalos know better: JuggaloBook has been around since at least 2008, judging by user comments and signup dates. The site is similar to Facebook, but renames well-known features in Juggalo lingo. Instead of pressing “like” on a “friend’s” status, for example, users click “Woop Woop!” on a “homie’s” status. Instead of gender, users identify as “Juggalo,” “Juggalette,” or “Juggalo (female).”

According to Vice Magazine reporter Tommy Lucente, 10,000 fans have already embraced the site. Lucente, a former Juggalo, registered on the site and was shocked by users’ trust in strangers:

“Everyone is looking to sext immediately, and they’re very liberal with providing personal cell numbers to strangers,” he wrote.

JuggaloBook may face a new problem thanks to its discovery by news outlets: the attention of Facebook’s litigious lawyers, who have been known to take legal action against rival social networks with the word “book” in their names.

The Daily Dot has reached out to JuggaloBook’s development team to share comments over a bottle of Faygo. We’ll keep you posted.