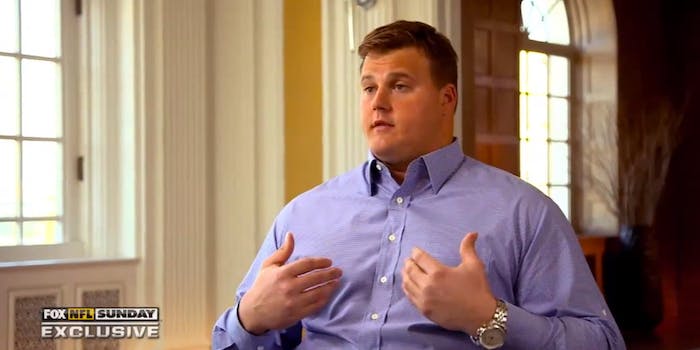 Martin, a second-year offensive tackle, left the team on Oct. 28 so that he could receive treatment for emotional distress.

Miami Dolphins guard Richie Incognito broke his silence Sunday over allegations that he bullied and threatened teammate Jonathan Martin. The NFL star claimed Martin had sent him a threatening text message—but, his lawyers noted, it wasn’t very threatening. It was a dumb Internet meme featuring a woman and a dog.

Here’s the backstory: Martin, a second-year offensive tackle, left the team on Oct. 28 so that he could receive treatment for emotional distress, and Incognito was suspended a few days later for mistreating Martin. A full investigation is in the works.

In a 10-minute interview with Fox Sports reporter Jay Glazer, Incognito denied that he was a racist and said the issue was more about him and Martin than bullying. However, according to Incognito, Martin sent a threatening text message as well.

The message was brought up by Incognito as an example of how the former teammates communicated with one another and how it was just part of the locker room culture.

David Cornwell, one of Martin’s attorneys, wanted to clarify a couple things. Yes, Martin sent Incognito that text message, but it wasn’t just a text message. It was a meme featuring a smiling woman and dog.

The meme was uploaded to We Know Memes in April and posted to 9gag, giving a different context to Martin’s message. While it might not be that funny, it was certainly meant as a joke. And with Martin reportedly planning to break his silence on the scandal soon, the meme may be the least of the troubling messages to come to light.