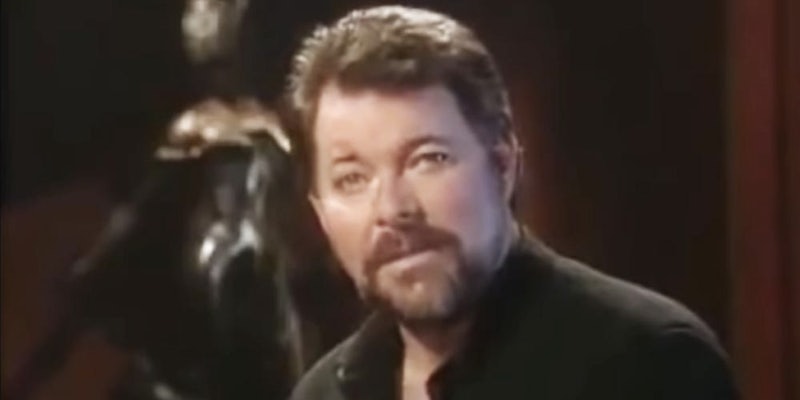 Jonathan Frakes confirms that you’re right in yet another meme

If you’ve ever questioned your judgment, Jonathan Frakes has good news: you’re absolutely right. Or so the Star Trek: Next Generation actor says in the latest meme to go viral.

In addition to the series that catapulted him to fame for the role of Commander William Riker, Frakes also starred in a lesser-known series called Beyond Belief: Fact or Fiction that ran on Fox for three seasons from 1998 to 2002. The premise was simple. Frakes presented scenarios involving unusual or supernatural occurrences, and then it was up to viewers at home to determine whether the story was true or false.

Beyond Belief: Fact or Fiction would have probably been a largely forgettable footnote in the actor’s career, had it not been for a 47-second-long supercut that went viral earlier this year in which Frakes chided his audience for getting it wrong.

And that’s how Frakes once again saw himself become a meme. But at least he had a good sense of humor about it, tweeting the video, adding: “I’m #proudtobeameme.”

After the clip gained viral popularity, someone else spliced together a similar clip. This time, Twitter user Zane Golia put together 42 seconds of Frakes asking absurd questions while teeing up a segment.

I made this for no one and no reason. Plz Enjoy….

In it, Frakes asked his audience about everything from how much money it would take for them to spend a night in a cemetery to the tallest man they’ve ever seen.

So now that we’ve seen a supercut of Frakes telling us that we’re wrong and posing bizarre questions, it only makes sense that someone has put together a clip of him telling the audience that they’re right.

“Is it possible this story is true? Yes it is,” Frakes says, in the clip that surfaced on YouTube earlier this month. “You’re right. It’s fact. Yes. Yes. A similar event did take place. You’re right. You are right. Our research found a public report of a similar story. Yes, it was.”

Having had their affirmations reinstated, people likewise began sharing this latest meme on Twitter:

Thank you, @jonathansfrakes. You are slowly restoring my shattered ego. https://t.co/8MGqLvynHH

If you're accusing me of loving the Frakes memes, buddy, I've got news for you:https://t.co/PcErD59dL0

When you’re the dumb friend of the group. https://t.co/JYknLAvUpD

And that’s why Jonathan Frakes is still the undisputed king of memes. Although he has yet to respond, we’re sure this one will also find him well.