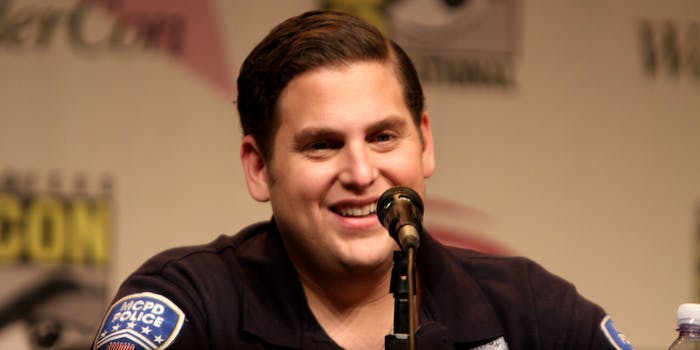 In the Internet age, you're not an A-lister until you make everyone mad.

In the throes of a celebrity scandal, the phrase “all press is good press” has long offered a way to shrug it off, a theory that it all comes out in the wash. The Internet age, however, has proved bad press not only equal to good press—but arguably better at generating buzz. Just ask Jonah Hill, who started trending this week after he verbally accosted a paparazzi who was harassing him. The two-time Academy Award nominee called the photographer a homophobic epithet, before instructing the gentleman where he could place his mouth.

Hill’s statements were as homophobic as they were fortuitously well-timed. The actor’s new film, 22 Jump Street, is set to debut next week to huge numbers, and just hours after the incident went viral, rave reviews for the comedy sequel hit the Web. Of course, it’s highly doubtful that Hill meant to court controversy by offending the LGBT community and their allies, but if anything, the moment only proved his star power. You’re no one these days unless the Internet wants you to apologize for doing something wrong.

There’s a reason that the A.V. Club termed Hill’s mea culpa his “apology tour.” After the incident, Hill went on Jimmy Fallon (likely already a scheduled appearance) to ask forgiveness for his heated words, choking up before the audience. It’s not only extremely heartfelt and touching; it’s also great television, and the clip quickly went Internet-breaking viral. Fallon’s team has made its reputation on generating video clickbait, and Hill’s apology was a gift from God.

Up-and-comer Shailene Woodley similarly proved her A-list status not by her box-office power or acting prowess but by her ability to generate think pieces, following her widely derided comments about feminism. In an interview with Time, the Earth-friendly Woodley was asked if she identifies as a feminist. “No,” the 22-year-old actress responded, “because I love men, and I think the idea of ‘raise women to power, take the men away from the power’ is never going to work out because you need balance.”

Woodley’s comments weren’t unusual or eyebrow-raising, given the common reticence among young women (especially famous ones) to identify under the feminist marker, and her comments certainly seemed to suggest that, despite the jargon, she is a feminist. Like my great aunt, who owned half of the businesses in her small town during a time hostile to female entrepreneurs, Woodley is working toward the goals of feminism, even if she might not want to put a label on it.

The wide backlash isn’t so much an indication of Woodley’s lack of nuance as it is America’s deep investment in celebrity culture, one in which actors are expected to be part-time politicians. But the difference is that while one ill-timed gaffe can shoot the hopes of a presidential candidate in the face (remember the much hyped Howard Dean yell?), a celebrity controversy is big business. After all, Charlie Sheen turned anti-Semitic remarks into a national tour, while bagging his own FX show out of the deal.

Miley Cyrus offers the perfect indication of the new normal of celebrity outrage culture. After her much-tweeted VMAs performance, Cyrus became so ubiquitous on the Internet that she briefly generated more Google hits than any other celebrity, topping out at over 1 billion search results. She still has 20 million more than Internet sweetheart Jennifer Lawrence, who racks up a relatively minor 41 million Google hits. Just as Internet writers who dislike more things have more material to write about, she who racks up the most hate wins.

In the wake of the controversy, Cyrus bagged a No. 1 single out of “Wrecking Ball,” whose music video then earned record clicks for Vevo, a great number of them motivated by hatred. I was the curator for another website at the time of the video’s airing, and it was understood that posting about Miley Cyrus would mean big traffic for the site, as people would click on almost anything Cyrus-related to feed whatever reason they chose to already dislike her. When it comes to hate, Miley Cyrus is the ultimate Rorschach test.

Nothing if not a shrewd businesswoman, Cyrus has done nothing to shy away from controversy, enlisting little people to dance on stage with her, continuing to dress provocatively, and making rape jokes designed to get the Internet’s collective panties in a bunch. Like Paris Hilton taking off her underwear to troll the paparazzi, Cyrus is proverbially flashing the cameras to keep our attention, giving us what we think we want.

This all might seem like mindless celebrity conjecture, but that kind of calculus comes with grave costs for our media age, a time when publications are behaving a lot like the celebrities they cover. In May, Time magazine pulled in monstrous traffic for publishing not the work of respected columnists Joe Klein or Joel Stein, but the incoherent rant of a college freshman, one designed to make the media critics wring their collective hands at the modern state of journalism. (Can you really blame them, though?)

Earlier this week, the Chicago Sun-Times proved an even worse case of this trend after the newspaper infamously published a transphobic screed from conservative National Review columnist Kevin D. Williamson. Titled “Laverne Cox Is Not a Woman,” Williamson’s reactionary essay attempted to use science to discredit Cox’s gender identity but devolved into a crude and laughable discussion of the God Eros. It’s the type of discussion you generally find on Reddit comment boards, not in a paper of record.

But the question becomes who is worse: the MRA wannabe or the paper who publishes him, despite presumably knowing better?

After a firestorm of criticism, the Sun-Times recanted the editorial and removed it from their website. In an apology issued to GLAAD, however, Editorial Page Editor Tom McNamee explicitly suggests that the essay was included in their publication as troll-bait, writing that the editors initially found Williamson’s piece “provocative.” McNamee knew exactly what he was doing. At a newspaper that famously laid off its entire photography department last year and that faces the same budget cuts and sorry circulation statistics as the rest of the industry, readership numbers matter.

In an article for Salon, Mary Elizabeth Williams argues that we don’t need apologies from people like Tal Fortgang or Tom McNamee, and I would say the same thing for Jonah Hill. It might be a nice moment for a public discussion on homophobia, but who will benefit at the end of the day, the queer rights movement or Jonah Hill? Hill might get applauded for saying he’s sorry and vowing to do better next time, but maybe we shouldn’t care so much what he thinks about gay people in the first place.