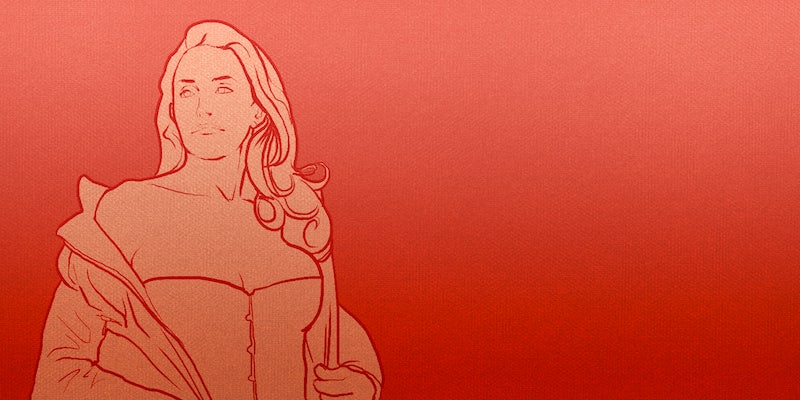 It's not about the sexism, stupid.

This week, Jon Stewart castigated the media for responding to Caitlyn Jenner’s Vanity Fear reveal with commentary on the way news personalities were suddenly treating her like a woman, with widespread assessments of her “fuckability” and comments on her age. Stewart wasn’t wrong in the sense that some of the most immediate responses were incredibly sexist, but he missed the mark, because this isn’t about misogyny, but about transmisogyny, and the fact that transgender women are only socially acceptable if they can “pass” as sexually appealing cisgender women.

This is a moment in human history when all people need to come together and admit that #CaitlynJenner is kinda hot.

I cant get over how hot @Caitlyn_Jenner looks in all these vanity fair photos!

Some of these responses even came from other women, underscoring the fact that women police each others’ beauty, too. For Caitlyn Jenner to win social acceptance, she didn’t just need to look sexually appealing to men; she also needed to convince women that she was one of them. In other words, she needed to pass—a term with incredibly complex and loaded social and political implications.

The media, and society in general, have difficulty relating to trans women. Either they’re stunning celebrities like Janet Mock and Laverne Cox, or they’re among the largely nameless and faceless dead. People draw a clear divide when it comes to whether trans women can be accepted as “real women,” and that dividing line lies squarely across how they present themselves.

At Vice, Paris Lees discusses passing privilege and how damaging it is for transgender women:

Passing privilege is similar to the privilege that cisgender people—that is, people who are not trans—enjoy, apart from one important distinction: It is conditional. It depends on conforming to a societal standard of gender presentation. It can be taken away. Essentially, passing privilege is a case of, ‘If you look a certain way, you don’t have to deal with all the bullshit that we hand out to other transgender people.’ It stinks. Passing may afford many privileges, but it is not a true freedom.

Stewart’s coy references to “transition” in a series of jokes to introduce each part of the segment only served to illustrate the fact that he was missing the point when it came to how people are reacting to Caitlyn Jenner. It’s not about how her transition means that she’s suddenly facing the same sexism and misogyny heaped upon cis women.

It’s about the fact that these comments reflect a fundamental view of trans women as inhuman unless they can pass—trans women must be glamorous, curvy, stunning, and very traditionally feminine—as though passing should be a goal for all trans women. Much has been made of the fact that Rob Kardashian initially didn’t recognize photos of Jenner from the shoot, repeating the idea that Jenner’s only an acceptable woman because she’s capable of deceiving her own family. She won: She passed.

Judging from her drastic shift in presentation for her Vanity Fair cover and her interview with Sawyer, it didn’t seem as though Jenner was comfortable being referred to as ‘Caitlyn’ and ‘her’ until she had achieved her own vision of what a woman should look like — one that conforms to conventional beauty standards steeped in patriarchal values that require enormous financial resources to build and maintain.

Transgender women are only perceived as successful if they can slip through society without attracting attention, and there’s a heavy demand for them to fit into very rigid definitions of traditional femininity and attractiveness. If they don’t meet those standards, they’re forever condemned to live the men in dresses stereotype, one that endangers transgender women by delving deep into the notion that trans women are threatening, out to prey upon cis men and women alike through deception and trickery.

That’s why trans women are at an incredibly high risk of experiencing sexual violence, assault, and murder. Suicide rates in the trans community are horrifically high. Transgender people are prime targets for discrimination, and many walk on eggshells throughout their lives, fearing outing and its consequences. Those who can be out and proud about their transness enjoy a considerable degree of social privilege: Jenner could be confident on the cover of Vanity Fair because of her social position.

Caitlyn Jenner (previously known as Bruce) looks sexy as a woman! You go, girl!!! Embrace who you are and don't be afraid!

The fact that she could appear on the cover of a major magazine and be perceived as “sexy” speaks to the fact that society can really only relate to trans women in terms of how sexually attractive they are. For women who can’t pass—or who reject pressure to pass and prefer to present as the women and people they are, not as the people society expects them to be—comes a heavy load of being considered unattractive. This isn’t just about wanting to find people to date, or wanting to establish social acceptance, but about the very real risk of being dehumanized as being not real.

Laverne Cox cut to the heart of the problems with the way people are reacting to the Vanity Fair cover on her Tumblr:

A year ago when my Time magazine cover came out, I saw posts from many trans folks saying that I am ‘drop dead gorgeous’ and that that doesn’t represent most trans people. (It was news to me that I am drop dead gorgeous but I’ll certainly take it.) But what I think they meant is that in certain lighting, at certain angles, I am able to embody certain cisnormative beauty standards. Now, there are many trans folks who because of genetics and/or lack of material access who will never be able to embody these standards. More importantly, many trans folks don’t want to embody them and we shouldn’t have to to be seen as ourselves and respected as ourselves. It is important to note that these standards are also informed by race, class, and ability among other intersections.

It’s notable that many of the responses to Jenner’s cover shoot suggested that she might not be as sexy without proper lighting, makeup, photoshopping, and costuming. The implication, that Jenner was only able to pass with assistance from outsiders to make her look more feminine, was very telling. And so was the focus on the surgeries she opened up about, as well as the speculation over surgical procedures she may or may not have received. Was she more or less of a woman for having implants, tracheal shaving, and facial surgeries? What’s under those scanty briefs?

The public and the media alike are treating Caitlyn Jenner as a freak show available for gawking and speculation, an issue faced by all trans women, but the argument that the problem here is about misogyny is a red herring. The real problem is the fact that trans women face very strict appearance standards with a pass/fail grade.

Pass and be celebrated as hot, sexy, and inspiring. Fail, and best of luck to you.

For a stark illustration of how trans women are graded, examine Jenner’s marks from last semester, when endless media organizations speculated about her gender and slammed her for looking “strange.” She was Photoshopped, the media gawked over her “confusing transition,” and the Kardashians were pressured for comment.

Now, she’s “sexy,” “hot,” and “inspiring,” all because she adhered to patriarchal norms about what women should look like on the cover of a national magazine.