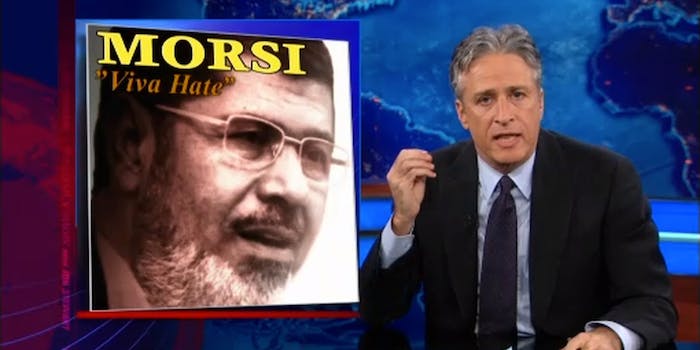 Jon Stewart condemns the arrest of his Egyptian counterpart

The Daily Show‘s Jon Stewart stood up for TV host and satirist Bassem Youssef after he was interrogated over the weekend for insulting Egyptian President Mohamed Morsi.

Youssef, who has been called “Egypt’s Jon Stewart,” turned himself in after a warrant was issued for his arrest on charges of insulting Islam and President Morsi. He was questioned for five hours and released on $2,200 bail (15,000 Egyptian pounds) on Sunday, according to the prosecutor’s office.

Youssef got his start on YouTube with The B+ Show, a series of satirical political programs inspired by The Daily Show that he started in response to the Egyptian Revolution. He now hosts El Bernameg (“The Program”) on Egypt’s CBC network. Stewart is a fan of Youssef’s work, and even had the Egyptian satirist on his show in June 2012.

Stewart took a good chunk of his show Monday night to attack Morsi for having thin skin and questioned the president’s priorities for arresting a popular TV host while there are so many other problems going on in Egypt.

“I know Bassem,” Stewart said, taking a moment to be serious. “Bassem is my friend, my brother. There are two things he loves in his world with all his heart: Egypt and Islam. And his family.”

He argued that without journalists and reporters like Youssef, who stays in Egypt despite people wanting to arrest him for voicing dissent against the government, Morsi wouldn’t even be in office today. He accused Morsi of being a hypocrite by doing the exact same thing that his predecessor, Hosni Mubarak, did by putting people in prison for “non-crimes.”

Morsi is also accused of being a hypocrite after arresting Youssef for insulting Islam while the President encourages his people to show “hatred toward those Zionists and Jews.”

Stewart notes that he is lucky that he gets to insult the president without being prosecuted for his opinion.

“So Bassem Youssef pokes fun at your hat and your lack of promised democratic reforms,” Stewart said. “What are you worried about? You’re the president of Egypt, you have an army. He has puns and a show, you have tanks and planes—we should know, we still have the receipts. Look, silencing a comedian doesn’t qualify you to be president of Egypt, just president of NBC. When you are actually powerful, you don’t need to be petty.”

He hopes that Morsi, who once promised that no Egyptian will be persecuted for having an opinion that differs from his own or goes against the government, will become the democratic leader that Egypt deserves.

While Youssef has called the persecution of people who speak against the government “the behavior of a fascist regime,” he isn’t too bitter about about his treatment. He continued to mock Morsi upon turning himself him by wearing an oversized graduation hat inspired by a hat Morsi wore while receiving an honorary degree in Pakistan.

Rather, he feels that other activists who are persecuted deserve more attention than he does.

“This kind of program is extremely new to the region,” he told CBS News on Monday. “We have actually created a huge impact on the region… We are destroying taboos, and taking away the holiness of the leadership through satire, through humor. So I think many people up there are panicking, and they don’t know how to deal with it.”