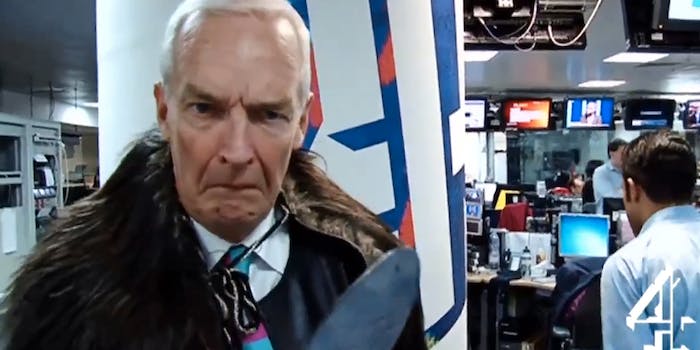 One is a Game of Thrones character. The other is just a character.

UK Channel 4 News Anchor Jon Snow isn’t just hungry for news—he’s now developed a taste for crow. The respected deskman of 25 years has apparently been harboring some ill-will against the bastard son of Eddard Stark for some time now. His cousin Dan revealed last year that Snow was upset there’s now a Jon Snow more famous than him.

“Every time he goes on Twitter, the mentions are all about the Jon in Game of Thrones.” Dan told the Telegraph.

The U.K. anchor has finally got his chance to go Snow to Snow with HBO’s Kit Harrington to determine who is the rightful heir to the Iron throne anchor chair. Jon Snow posted a photo of himself with Harrington, captioning it: “Jon Snow meets Jon Snow.”

Thanks to this behind-the-scenes video detailing Snow’s preparation for the interview, including full Night Watch regalia, we’re predicting an interview more epic than the Battle of Blackwater Bay.