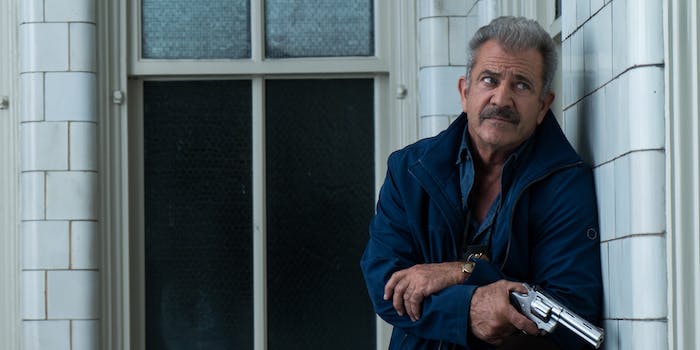 'Way to deflate any widespread enthusiasm for that series.'

The John Wick franchise boasts a lot of goodwill. Critics love it. Action movie buffs love it. Everyone adores Keanu Reeves. And in a low-key way, John Wick has also become one of Hollywood’s most inclusive franchises, starring a racially diverse cast and featuring the first non-binary character in a film of this type.

So it’s surprising—shocking, even—that John Wick‘s TV spinoff The Continental will star Mel Gibson, a man whose name is synonymous with bigotry and scandal.

The Continental will air on Starz, a three-night TV event focusing on the franchise’s hotel for assassins. It’s a prequel set in the 1970s, exploring the backstory of Continental manager Winston (Ian McShane in the movies). Mel Gibson will play a new character named Cormac; the first casting announcement for the miniseries.

This news was immediately met by disgust and disbelief on social media. Gibson has been accused in the past of racism, sexism, homophobia, and anti-Semitism. He was accused of physically and emotionally abusing his ex-girlfriend Oksana Grigorieva, who released a notorious 2010 audiotape in which Gibson admitted to hitting her, threatened to burn the house down, used the N-word, and said that Grigorieva deserved to be raped. (Gibson pleaded no contest in court and was sentenced to community service and a fine.)

Coupled with his 2006 DUI arrest (during which he allegedly went on an anti-Semitic rant and sexually harassed his arresting officer), this led to a temporary slow-down in Gibson’s career. But over the next few years, he was welcomed back into the Hollywood fold, with Hacksaw Ridge (which he directed) earning six Oscar nominations in 2016. His thriving career is often used as proof that “cancel culture” doesn’t exist for A-list stars, and he remains a controversial figure. Hence the reactions to this John Wick news.

Of course, social media reactions aren’t the defining measure of a star’s reputation. People on Twitter are angry, but have mainstream audiences quietly forgiven Gibson? Is he a bankable star once again? Well, judging by his recent projects, the answer is no.

Gibson’s last three movies (Boss Level, Fatman, and Force of Nature) were flops, although in fairness they came out during the pandemic. Looking back a little further, The Professor and the Madman (2019) was also a commercial dud, as was Dragged Across Concrete (2018). His last hit was the comedy sequel Daddy’s Home 2 in 2017. As an action star, his only recent-ish success is The Expendables 3 (2014), joining the franchise as a supporting character. So while plenty of filmmakers are happy to work with Gibson, audiences aren’t exactly turning out in droves. And some people clearly see his presence as an automatic turn-off, tarnishing John Wick‘s positive reputation.

In the post-Me Too era, people are increasingly conscious of casting decisions like this one—especially in a media property that people genuinely care about. Just look at the furor around Johnny Depp’s former role in Fantastic Beasts. It’s hard to see how Gibson can possibly be a good starting point for John Wick‘s first big spinoff.

The Daily Dot has reached out to the Starz publicity department for comment on this controversy.