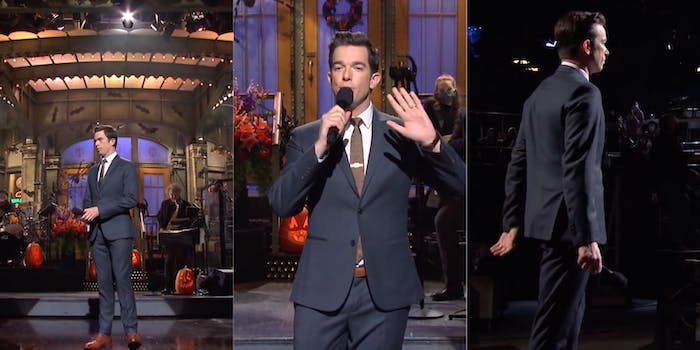 'The rich will continue to prosper while the poor languish.'

“Oh, yes, I’m supposed to make an announcement,” he says. “On November 3rd, there is an elderly man contest.”

“So there’s two elderly men, and you’re supposed to pick your favorite of the elderly men,” he continues. “You can put it in the mail, or you can go and write down which elderly man you like, and we’ll add them all up. Then, we might have the same elderly man, or we might have a new elderly man. But just rest assured, no matter what happens, nothing much will change in the United States.”

Even as a joke, some viewers are claiming that for Mulaney to express that there’s virtually no intrinsic difference between Trump and the former vice president is wildly reckless and lacking in empathy for vast swaths of Americans. It was a comment, critics are saying, that only a privileged straight, white male could make.

Mulaney later implied that Trump and his acolytes were the “new Nazis,” but the damage had been done for many on Twitter.

“‘Nothing will change’ from the outcome of the election? Really, John Mulaney? Even as a joke? Okay then,’ wrote activist Charlotte Clymer.

When some asked her to “chill out,” she replied: “No, we’re right to be annoyed. You can’t have it both ways. You can’t claim that comedy is really smart and truth-telling and reflects society and then say ‘oh, chill the fuck out’ when someone says something like that 48 hours before the most consequential election ever.”

However, a number also saw Mulaney’s quip as the truth said out loud.

But others from affected communities saw nothing funny in Mulaney’s joke.

“The families of covid victims would like to have a word. And people of color. And voting rights. And the environment. And our allies. And people with pre-existing conditions or without health care (me). Oh, and my uterus, she’s mad. But thanks for the funnies, John!” Twitter user @Cait_Santana wrote.