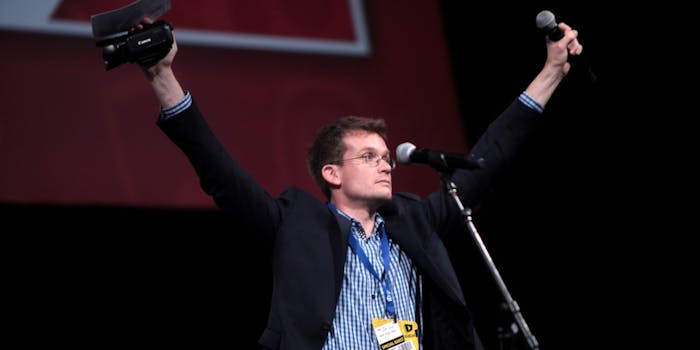 While many authors deserve the credit for the recent renaissance of young adult and middle grade fiction, there’s one in particular who was a catalytic force in propelling literature for children into the larger sphere, driving millions of readers to bookstores, and sparking a massive, global movement of fans. Earlier books on quirky, sweet, delightful subjects gave way to progressively darker ones that still retained a characteristic whimsy and sense of humor, and this author’s fame only grew with each title. The author’s public appearances were greeted by thousands of screaming fans, and the books led to movie adaptations and to a whole new fandom.

You might thinking I’m talking about John Green, the current media darling, who’s been repeatedly credited with making YA mainstream, but, actually, I’m not. I’m talking about J.K. Rowling and the Harry Potter series, where weren’t just groundbreaking and didn’t just inspire a new revival in children’s literature. They shaped an entire generation.

Rowling’s story is probably familiar by now: A scrappy single mother, she pounded out the pages at cafes between dealing with childcare and trying to survive. Her agent took her book to numerous publishers, all of whom weren’t interested, and it took a determined eight-year-old to get the book published: Bloomsbury Chairman Nigel Newton’s daughter Alice read the book, loved it, and pushed him to acquire it. Bloomsbury, then a relatively new publishing house, paid £2,500 for the manuscript and ran an initial print run of 500.

The phenomenal success of Harry Potter blew fresh life into children’s publishing, which had been steady but small. Now, titles like Divergent, The Hunger Games, and The Maze Runner are all being adapted to film, and YA continues to be a strong sector of sales growth. John Green was actually relatively late to the party with his first book, Looking for Alaska (published in 2005)—yet he’s become the dominant face of YA, something which has been the subject of considerable controversy.

It’s tempting to attribute the gap to sexism, which clearly plays a huge role in it—something Green himself has acknowledged. Women writers concerned with the issue have also discussed the role of sexism in conversations about who “invented” YA, with women like Maureen Johnson being particularly active commentators.

The claim that Green somehow invented or revolutionized young adult literature, of course, does a huge disservice to 19th century writers like Louisa May Alcott who wrote books that were tremendously popular among children. It also gives short shrift to revolutionary mid-century writers like Judy Blume and Beatrice Sparks. But it’s not just about typical sexist attitudes to women in publishing.

Starting in 2007 with the Brotherhood 2.0 Project, Green has built himself a massive online empire with millions of followers, known as nerdfighters. He’s involved with Mental Floss, he pushes his followers to get engaged in Kiva lending competitions, and has created an astounding 11 online series. Two million people subscribe to the Vlog Brothers on YouTube, while seven and a half million subscribe to the network’s various channels. He also launched the Project for Awesome, which raised almost $900,000 for charity in 2013. He’s highly active in charity work on and offline, and he’s often spotted at conventions and other events like the upcoming LeakyCon.

In an era when authors are increasingly encouraged and sometimes required to leverage their online presence, Green is a trendsetter. Working ahead of the curve for many YA authors, he built a lively, engaged, active fandom online and maintained it through constant engagement, contact, and new projects to keep people interested. His online fandom heavily fed his books—both directly in the sense that his fans were a huge part of their success and indirectly as a result of fans putting pressure on friends and relatives to pick them up, too.

With The Fault in Our Stars, Green exploded into popular culture, and even those who weren’t ardent nerdfighters were sucked into the John Green phenomenon. In that environment, it’s easy to see why Green is often credited with revolutionizing young adult literature. Not only is he the white male author of bestselling YA, and thus the beneficiary of huge privileges in the industry, but his online presence is huge.

J.K. Rowling may have 3.46 million Twitter followers, but she isn’t as actively engaged with them as Green is with his 2.89. While numerous young adult authors have some degree of an online presence, few have a presence as comprehensive as Green’s, and few have the energy to engage with their readers as much as he does. He’s omnipresent online, with Twitter, YouTube, Facebook, Tumblr, Instagram, and other social media accounts. He’s a publicity department’s dream, creating substantial word of mouth and buzz for his other books.

But are his books, like Rowling’s, generationally defining? Harry Potter spanned seven books, released over almost 10 years. Children grew up with them, and many of those same children were turned on to reading by Harry Potter. Some even went into publishing because of the series, as evidenced by the huge level of Harry Potter fandom among editors, agents, and other publishing professionals who work in the kid-lit world (including Green himself). The story of the “Boy who Lived” is wound into the fabric of English-speaking mythology now and is such an accepted pop culture phenomenon that references to the book are comprehensible even to those who haven’t read them.

There’s a Harry Potter theme park, an assortment of accompanying movies and merchandise, and, of course, a massive world of fan fiction online. Harry Potter fans may have done more for the explosive growth of fan fiction than those in almost any other genre, with over 60,000 works tagged “Harry Potter” in AO3. Contrast that with just 89 works for The Fault in Our Stars. Rowling’s fans are online and engaged, but she’s not there with them.

Of course, many women making waves in YA and middle grade are also active online, often across multiple platforms, and like Green, they’re out on tours, attending conferences, and engaging with fans. But none have an online empire to rival Green’s, or the capacity to muster millions of followers. Are we going to remember the architects and founders of the YA renaissance by who wrote the most compelling fiction and who influenced a generation or by who had the most YouTube followers?