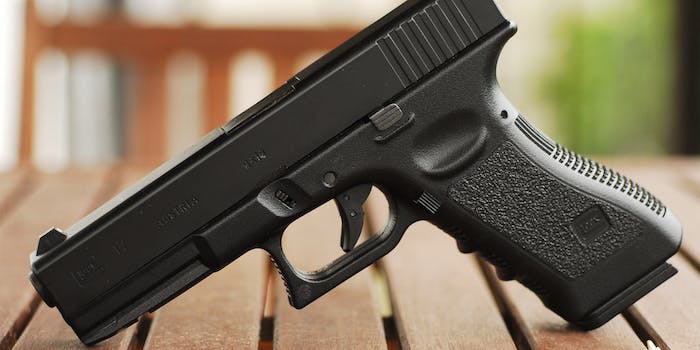 Video allegedly shows he was just shopping at a Walmart.

Footage from a Walmart security camera allegedly shows police officers opening fire, without warning, at an unarmed African-American man, according to a lawyer representing the deceased man’s family.

John Crawford III of Beavercreek, Ohio, was killed by police on Aug. 5, inside a local Walmart. The officers involved in the shooting were responding to a 9-1-1 call that reported an armed man inside the store. The firearm in question, which was in Crawford’s possession when he was killed, was a pellet gun from the store’s toy department.

A grand jury will convene on Sept. 22 to hear the case, and two special prosecutors have been appointed by Ohio Attorney General Mike Dewine. To ensure a fair and impartial jury, Dewine says, there are no plans to release the Crawford shooting video.

According to local media, Beavercreek police claim that Crawford was waving a firearm around the store and refused to comply with police commands. Attorney Michael Wright, who viewed the Walmart footage alongside Crawford’s family, says the video contradicts the officers’ account.

“He was doing nothing more, nothing less than just shopping,” Wright said at a press conference this Tuesday. Crawford was leaning on the toy gun and talking on his phone when he was shot from behind by police and killed, Wright alleges. There was no request made by police for Crawford to surrender, he says.

Both online and at public events, Ohio activists have called on the attorney general to make the video public.

One of the officers involved in the Crawford shooting, Sergeant David Darkow, has returned to duty, according to the Ohio Associated Press, while another, Officer Sean Williams, remains on administrative leave.

The Beavercreek police department was not immediately available for comment.

African-American community activists in Ohio have called on federal authorities to assume control of the investigation, citing the community’s distrust of local government.

“There’s a feeling of uncertainty and mistrust that has been fostered by the lack of transparency in the current investigation and the long history of justice delayed and denied,” read an open letter from Ohio activists to U.S. Attorney General Eric Holder.

Community organizers in Beavercreek have planned a rally on Saturday, Aug 30, to be held at the Walmart where Crawford was killed. The activists, who intend to raise awareness of the shooting, are also calling on Walmart to either lock up or stop selling the realistic toy guns.

Rev. Al Sharpton was invited by local organizers to the Saturday event but will not be in attendance. A spokesperson for Sharpton’s National Action Network says he plans to be in the area in mid-September to draw more national attention to the Crawford case.