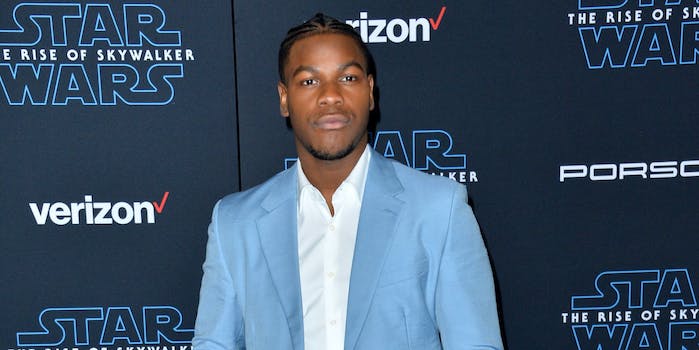 'The murderers need to be charged severely.'

John Boyega joined the growing outcry condemning the death of George Floyd by Minneapolis police officers and doubled down after some people took issue with the language that he used.

He shared a photo of Floyd on social media Wednesday as he called for the police officers involved with Floyd’s death to be charged with murder and followed it up saying, “I really fucking hate racists.”

His tweet about racists is a short statement, one that gets to the point. His message and anger resonated with a lot of people, and since Boyega posted it, his tweet has been liked more than 1.5 million times. But if you wade into Boyega’s mentions, people had issues with just about everything about it, from his cursing to the use of the word “hate” in his condemnation of racists.

But even more people seemed to take issue with Boyega calling out racists on his Twitter account as some tried to derail the conversation or push back against Boyega’s original message.

When Boyega later took to Instagram Live, he refused to back down or apologize for his message. For him, condemning racism and the death of Floyd at the hands of the police is an important thing for him to speak out against.

“It’s very, very important at this time that we ignore ignorance and we ignore people that come through and try to make these situations what they’re not…” he said. “I’m not even apologizing, first of all, you better fucking believe that.”

But he also stressed that it’s not about career or money, two things that critics like to bring up whenever he does speak out, and he iterated that his critics can’t rattle him; it’s not the important thing in all this, money and career “don’t have anything to do with how you treat people.”

“If you’re a fan of me and you support my work and you’re racist and you’re arguing what I was saying, fuck off, you fucking dick heads,” he said.