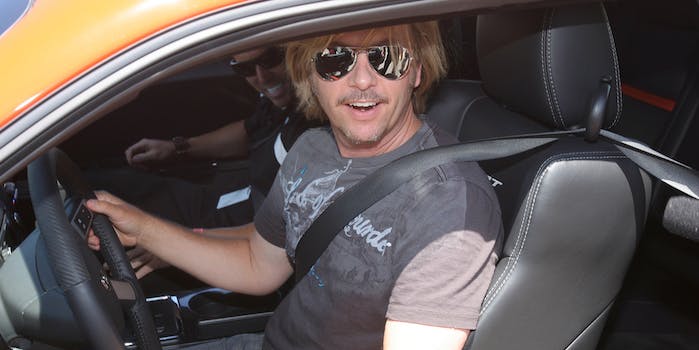 The Joe Dirt sequel is coming in 2015, whether we like it or not.

Steel yourselves, America. For as it was written in the Book of Revelations, in the year of our Lord two-thousand and fifteen, a sequel to the 2003 David Spade comedy Joe Dirt would come into being, to usher in a new era in which we are judged for our sins and transferred to an alternate plane of existence. Thanks to the Sony-affiliated streaming service Crackle, Joe Dirt II: Beautiful Loser will come into being, this news coming on the heels of Netflix’s announcement of a four-film partnership with Adam Sandler’s Happy Madison productions, which oversaw Joe Dirt the first and a series of other films that you probably didn’t laugh at all that much.

But let’s table the glibness for a moment, even if virtually nobody else is. If you’re surprised that Joe Dirt is getting a sequel, well, you’re not alone. The general Internet response seems to be pitched somewhere between bemusement and scorn. Slashfilm referred to it rather bluntly as “the sequel no one asked for.” Uproxx says, “We brought word that Joe Dirt was returning last month, probably fooling some of you into thinking it was some sort of fantasy despite it being very real.”

Most people aren’t even treating the prospect of a second Joe Dirt with the kind of contempt that greets most new Adam Sandler projects at this point in the history of cinema, so much as befuddlement that someone somewhere decided that there was an ample enough potential audience to justify a sequel.

But it makes sense. Well, kind of. Cinemablend makes a necessary and valid point in observing, “Like a lot of comedies, Joe Dirt didn’t exactly make a fortune when it first hit the box office. In fact, the results were mediocre at best, but thanks to continued airings on cable and the weird rewatchability of the project, it has slowly turned into a cult classic over the years.”

The film grossed $28 million on an $18 million budget, so it was mildly profitable, but that’s not what counts. What counts is the film’s ad nauseum replays on Comedy Central over the years, in an endless daytime rotation with other luminaries like Real Genius and Corky Romano. Even if it’s a Clockwork Orange-type situation in which high schoolers home sick from school were inundated with David Spade yelling “Dang!” as a catchphrase, well, it sort of worked. A lot of people remember Joe Dirt to the extent that even news of a dubious sequel can still go mildly viral.

And it’s not the worst movie in the world, either. Yes, it’s a Happy Madison production, which means Joe Dirt is still beholden to the casual homophobia, overwrought cameos, and grossout gags that designation might imply.

But it’s also one of the darker offerings the production house has ever turned out, the chronicle of David Spade’s relentlessly positive man-child who’s brought onto a drive-time radio show by an obnoxious shock jock (Dennis Miller) who intends to make a mockery of the mulleted station janitor. But once Joe starts telling his life story, he ends up an unlikely cult hero to people inspired by his boundless optimism in the face of living a vagrant’s life after his parents abandoned him at the Grand Canyon.

It still has some needless bits, but there’s a sweetness to Joe Dirt that resonates more than a film starring Kid Rock as its primary villain probably should. In Joe, Spade gives his most likeable film performance as a guy who’s too innocent for the modern world, and wants to go back to the ‘70s, when rock music was better and people were less jaded.

It’s an analog comedy in a digital world, and so it makes sense that a certain cult following would build around it beyond the Comedy Central circuit. Yes, it’s also a film in which an RV’s septic tank covers Spade in feces within the first half hour, but given how dire some of the later Happy Madison offerings have ended up being, at least Joe Dirt has its heart in the right place. Or, really, a heart at all.

What’s perhaps most curious about Beautiful Loser, if anything, is what it suggests about the future of the hastily produced sequel. After all, this is hardly without precedent; since the rise of VHS, studios have turned out shoestring-budget sequels to popular movies for the straight-to-video audience. They’re the movies that have cover art which sort of resembles the original film’s poster, but not really, and there’s at least a 40 percent chance they star either Dolph Lundgren or Cuba Gooding Jr.

The cottage industry of cheapie sequels has been around for years, but what’s curious about the Crackle deal is that straight-to-video has become straight-to-VOD, and as movies increasingly head for the new digital frontier, so too shall these follow.

For Crackle, it’s a brilliant move: Get a movie with a bit of a following, one that was mainly born out of Joe Dirt being in a convenient place at the right time, and offer up a sequel that a) includes at least its original lead, which is more than can be said for the average home-based sequel, and b) offers audiences the chance to watch it through the same inertia-based process that led to Dirt’s following.

In the Internet age, it’s remarkably easy to get people to watch something, as long as you streamline the viewing process as much as possible. Beautiful Loser has further delineated the process, by putting it on a free service that anybody with a Playstation 3 can use instantly. By just being there, Beautiful Loser will probably end up finding more eyeballs than it would have in theatrical release, especially given the modern-day reputation of just about any Sandler offering. For a film about a guy who was continually just in the right place at the right time, it’s a weirdly appropriate strategy.

Photo via dodgechallenger1/Flickr (CC BY 2.0)