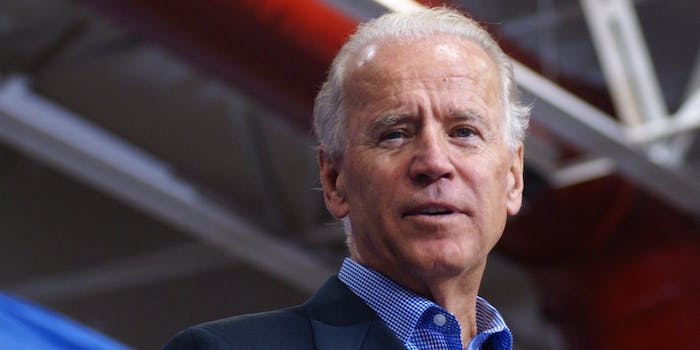 While his son's tragic death affected his decision, that's not the whole story.

Joe Biden isn’t running for president. After a months-long saga of will-he-or-won’t-he, the Vice President has decided against entering the Democratic race. In a heartfelt press conference in the Rose Garden that livestreamed on the White House website, Biden told the Web that when it comes to his 2016 ambitions, he’s decided that it’s time to throw in the towel. Biden is right—but maybe not for the reason the Internet thinks.

Joe Biden has long been the Democrats’ break-the-glass candidate, and over the summer, it looked like they’d need to reach for the hammer. Former Secretary of State Hillary Clinton’s poll numbers were falling, and her mishandling of the controversy around her private email server led many pundits to long for a gaffe-prone Biden over a scandal-ridden Clinton. It’s not hard to see why. Biden’s popularity is undeniable. Whether eating ice cream or cursing on national television (he once told President Obama that a piece of legislation was a “big f***ing deal”), he has become one of the most popular memes of the decade. The Internet, at least, was ready for Biden to #RunJoeRun.

Is Joe Biden the Bernie guy everyone likes? Sad to see him go, everyone wanted him to be Prez…

Thank your for your service, @VP @JoeBiden. I'm sad, but I totally get it. You've given so much to this country.

Trouble was, Biden himself—or perhaps more accurately, the Vice President’s family—was not.  The death of his son, Beau, in May was undoubtedly heartbreaking for the Biden family, and it divided his focus. As he famously told Stephen Colbert last month, “I don’t think any man or woman should run for president unless … they can look at the folks out there and say, ‘I promise you, you have my whole heart, my whole soul, my energy, and my passion to do this.’ And I’d be lying if I said I knew I was there.”

While Biden’s grief has become the popular narrative around his candidacy, that’s not the whole story. In October, Politico reported that the touching story about Beau’s dying wishes for his father to run for the presidency were leaked by the Biden campaign itself, indicating that he was finally ready to run. The bigger problem, however, was that Joe Biden was going to lose.

There is no doubt that Biden wanted to be president. As David Cantanese wrote at US News & World Report, the framing of his Rose Garden speech spoke volumes about his ambitions. “Unfortunately, I believe we are out of time,“ Biden told America, and as Cantanese argued, that “use of ‘unfortunately’ … indicated he did [want to run].” But as Biden himself hints, he passed up numerous opportunities to jump into the fray—including his appearance on the The Tonight Show or before the first presidential debate began. By the time he felt ready to make a decision, the party had moved on.

Whether eating ice cream or cursing on national television (he once told President Obama that a piece of legislation was a “big f***ing deal”), he has become one of the most popular memes of the decade.

It’s not just about timing, though; it’s about having a raison d’etre. The Draft Biden camp existed not because they were enthused over his policies but because they were nervous about Hillary Clinton. However, she did exceedingly well in the first Democratic debate, boosting her poll numbers and solidifying her place as the frontrunner. “The stage felt fully complete without Biden there,” NPR’s Jessica Taylor wrote following the debate, echoing what a lot of pundits who had previously clamored for Biden were thinking: The Vice President wasn’t necessary after all.

It sounds harsh, but the polling suggested that Biden would have an uphill climb following Clinton’s stellar debate performance. Biden’s poll numbers rose with the rising tide of skepticism over Clinton’s viability, but as the Washington Post reported, his numbers began to erode as Clinton stabilized. He never attracted much enthusiasm from Sen. Bernie Sanders (I-Vt.) supporters; Biden is, if anything, slightly to the right of Clinton—while Sanders, a self-described democratic socialist, is fairly far to the left of her.

While Sanders, thus, offers a stark contrast to Clinton’s centrist, Wall Street-friendly record, Biden would have had little to differentiate himself politically. Biden and Clinton both served in Obama’s administration, and even their resumes aren’t all that different, as Chris Cillizza argued for the Washington Post: “Both are longtime pols. Both are considered establishment candidates. Both are rightly regarded as pragmatists, not ideologues.” This means that the Democratic race would have become less about substantive policy issues and more about personality differences. To make waves, Biden would have had to do what Clinton and Sanders have vowed not to—get personal.

However, Joe Biden has shown that he has no issue with this. Biden already taken swipes at Hillary Clinton, telling a crowd on Tuesday: “I don’t think my chief enemy is the Republican Party.” This comment was a clear allusion to Clinton’s claim during the debate that the GOP is the biggest obstacle to political progress in Washington.

If he had charged directly into the campaign, it would have, thus, been a disaster for the party. Biden might not be thrilled with Clinton, but no one wants to see the race for the nomination turn into the circus that has characterized the GOP campaign—most of all voters. When Sanders called out the partisan attacks that have characterized the email crusade against Hillary Clinton, he drew the biggest applause of the first Democratic debate. That’s what voters want to hear—a focus on the real issues, not petty political infighting.

Faced with running an anti-Clinton campaign, Joe Biden had no realistic chance of becoming our next president, and bowing out was a smart move. But Biden has vowed to use his remaining time in office to be the effective leader he wanted to be in the White House. “[W]hile I will not be a candidate, I will not be silent,” Biden said. “I intend to speak out clearly and forcefully, to influence as much as I can where we stand as a party and where we need to go as a nation.” Among other agenda items, Joe Biden vowed to further a culture of bipartisanship in Washington and help fight the influence of money in politics.

It’s a bittersweet coda for a man who has spent his life in public service, but it’s one history will remember him kindly for.