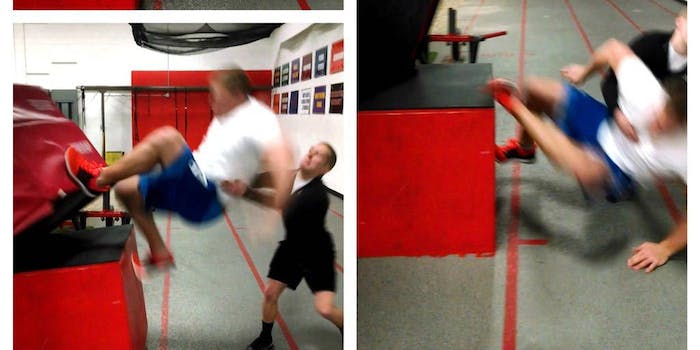 J.J. Watt usually clears the boxes he jumps. When he doesn't, though, his spotter should beware.

J.J. Watt is a superstar residing in a freak of nature’s body. The Houston Texans defensive end is the best defensive player in the NFL—and perhaps the best player overall—and if you challenge him to jump onto a very tall box, he likely won’t back down from the dare.

He did it on Jimmy Kimmel‘s show while wearing a suit and jumping over Kimmel and his sidekick, Guillermo, where he traversed impressive height and impressive distance. Keep in mind that Watt is 6-foot-5 and 290 pounds and was wearing what I imagine to be an expensive, tailor-made suit.

We’re not sure of the height of that particular box, but here’s Watt clearing a box that’s 59.5 inches. In other words, a half-inch short of five feet or a full Danny DeVito.

But those spectacular athletic feats don’t mean Watt is infallible. Because sometimes Watt falls, and somebody has to be there to catch him. Just hope for that spotter’s sake that he can survive what surely feels like a plane falling out of the sky on top of you.

Unfortunately, this has happened…

You'll never know what you're truly capable of unless you push yourself to the limits. 5'1" fail. #SpotterStruggles pic.twitter.com/1eM712WBMI

That’s Watt trying to clear 5 feet, 1 inch—or the approximate height of an Olsen twin. He didn’t make it. Not only did he fall, he landed on his spotter, who looks to be about the size of a DeVito.

Oh well, such is life for a person much smaller than Watt having to break Watt’s fall when he fails a box-jump. As far as we know, the spotter survived and is in good spirits, though likely wary of spotting Watt again.