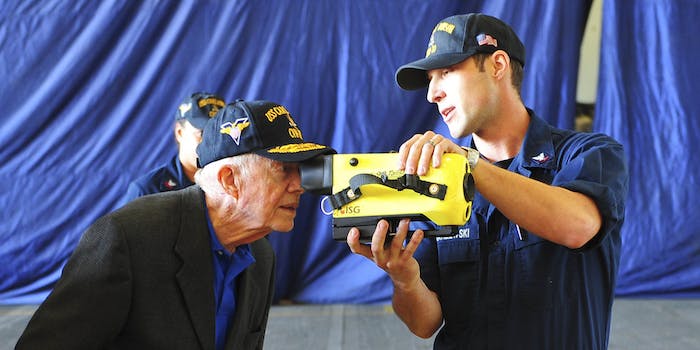 Stephen Colbert has done it again.

Former President Jimmy Carter may be worried about how technology is helping erode civil liberties, but he’s warming up to one modern invention. He sent his first text message yesterday, and it’s all thanks to Stephen Colbert.

The 89-year-old appeared on The Colbert Report Tuesday to promote his book, “A Call to Action: Women, Religion, Violence and Power.” While Colbert took him to task as usual, texting didn’t actually come up in the interview.

Instead, it was his appearance on Colbert’s show that prompted his very first text to his son, Jason. And Carter was happy enough with the interview to see if his family watched it.

“Who says you can’t teach an old President new tricks?” he added.

Carter’s even got himself an iPhone! And it was a fairly decent first text. For anyone with older parents and grandparents who struggle with the technology, even getting something as simple as “okay” from them without somehow locking themselves out of their phone is something to celebrate.

Carter isn’t the only president who Colbert has managed to bring over to the tech side. When he had former President Bill Clinton on last year, Colbert forced him to make his very own Twitter account on the show—with Clinton officially joining Twitter two weeks later. And more than a month after Colbert attended a state dinner with Barack Obama, the president is considering ditching his Blackberry for something a little more practical.

Is the latter a coincidence? We doubt it.