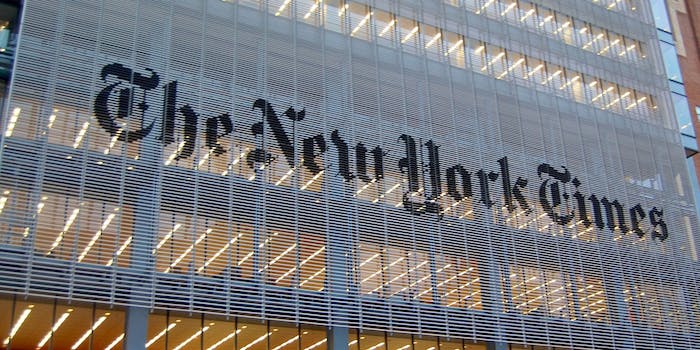 Did the New York Times just take #banbossy to a whole new level?

The New York Times has fired its first female executive editor, Jill Abramson, citing the need for a change and “an issue with management in the newsroom.”

But the New Yorker‘s Ken Auletta, who profiled Abramson in 2011, has taken to his staff blog to discuss the alleged real reason behind Abramson’s abrupt departure: She asked for equal pay.

While initially noting that the reason for the switch was not immediately clear in a brief announcement about the change, the Times updated their report to include more details about the swift firing and a statement from the 60 year old Abramson, who started at the company in 1997 and had held the position for three years.

“I’ve loved my run at The Times,” Abramson said. “I got to work with the best journalists in the world doing so much stand-up journalism.” The Times also noted that she cited her appointment of women to senior editing positions as one of her notable achievements.

But Times publisher Arthur Sulzberger, Jr. told the newsroom Abramson was leaving over friction with management:

“I chose to appoint a new leader for our newsroom because I believe that new leadership will improve some aspects of the management of the newsroom,” he said. “You will understand that there is nothing more that I want to say about this. We had an issue with management in the newsroom. And that’s what’s at the heart of this issue.”

Auletta, however, reports that in addition to “the management’s narrative” that Abramson was “pushy,” relations between Sulzberger and Abramson broke down over three primary issues: equal pay, a decision she made to hire a new staff member, and the issue of marketing intrusion into the editorial side of the paper.

The first issue, according to Auletta, was that Abramson discovered she was receiving less in salary and benefits than her predecessor. Not only that, but during the time she had served as managing editor of the newsroom, Abramson learned that her deputy managing editor had been making more than she had. Abramson allegedly hired a lawyer to make “polite inquiries” into the status of her salary relative to her male co-workers and predecessors. According to an unnamed associate of Abramson, this move “set them off.”

The second issue is that Abramson, allegedly believing she had the full support of Sulzberger and company C.E.O. Mark Thompson, tried to hire a new deputy digital managing editor, who would oversee the website and report to Baquet. However, Abramson’s alleged failure to consult Baquet caused him to take the matter up with Sulzberger.

This account contradicts a statement Salzburger reportedly made to Times reporters earlier Wednesday, in which he apparently claimed that Abramson “[tried] to hire a senior editor from outside the newspaper to share a co-managing editor title with Mr. Baquet.”

The final named issue is one of policy : Abramson balked at the encroachment of native advertising into the editorial content of the newspaper. This allegedly caused her to clash with Thompson. Again, this contradicts Sulzberger’s statements about Abramson’s departure; he reportedly told editors the decision had nothing to do with the state of relations between the business and editorial departments of the Times.

At the time of her firing, Abramson had allegedly hired a consultant to work on her management and leadership skills, presumably because she had a reputation as being difficult—a familiar narrative of women in professional positions of power.

The news also comes on the same day that Le Monde‘s first female editor-in-chief Natalie Nougayrède resigned after only a year in the role, citing “direct and personal attacks” made against her by staff who resisted her planned changes for the paper.

In reaction, Twitter media pundits, female professionals, and feminists began discussing Abramson’s departure as a cautionary tale, a sign that the “Lean In” approach—a philosophy of professional advancement for women espoused by Facebook COO Sheryl Sandburg—was no guarantee of safety at the highest levels of business.

It also comes on the heels of social media discussions of the way women are treated in the workplace, like the #banbossy movement ironically started by Sandberg herself.

While conversations about the need for equal treatment of women in the workplace has been a hot topic lately, women in the media are still struggling professionally. In addition to the deeply entrenched systemic sexism faced by women in the tech industry, men still account for two-thirds of newsroom staff in media outlets and print publications.

Meanwhile, Baquet’s appointment as Abramson’s replacement could prove a much-needed boon to an industry that is still predominantly white.

“It is an honor to be asked to lead the only newsroom in the country that is actually better than it was a generation ago,” Baquet said about his appointment.

But with Times staffers reeling from Abramson’s departure, many may be questioning whether the newsroom was better than it was yesterday.

Update: Publisher Arthur Sulzberger reportedly sent the following note to NYT staff today, denying all allegations that Abramson was fired for having sought equal pay. “It is simply not true that Jill’s compensation was significantly less than her predecessors,” he wrote. “In fact, in 2013, her last full year in the role, her total compensation package was more than 10% higher than that of her predecessor, Bill Keller, in his last full year as Executive Editor, which was 2010.”