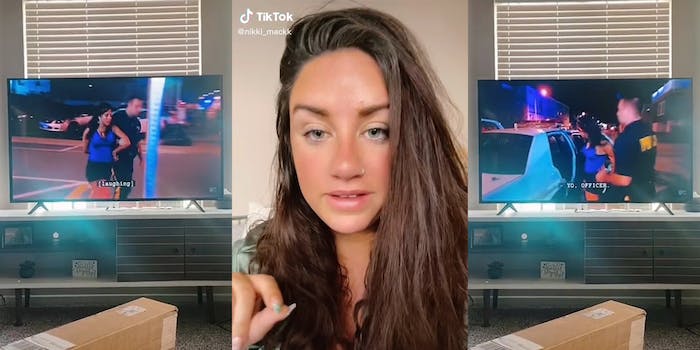 ‘I know your NDAs are up, and I’m ready for you to spill the tea’: Woman calls on ‘grenades’ and other women who appeared on ‘Jersey Shore’ to come forward

'I’m ready to hear your side of the story.'

A TikToker is calling on women who appeared on Jersey Shore to share their experiences now that the hit reality show has been off-air for nearly a decade. Her now-viral video sparked a conversation about what went on behind the scenes of the series.

In a video posted Sunday, Nikki McCusker (@nikki_mackk) says she is ready for women who appeared as romantic interests of the show’s cast members to come forward with their “side of the story.”

“I know your NDAs are up, and I’m ready for you to spill the tea,” McCusker says.

McCusker is referring to non-disclosure agreements, which are legal agreements that prohibit people from sharing certain information, according to the Cornell Legal Information Institute.  NDAs are often used with reality television personalities to keep information about the shows confidential. Many NDAs have a duration clause, allowing individuals to share information freely once the contract has expired.

“I’m talking about every grenade, every rocket launcher, every girl Paulie and Mike brought home and smushed,” McCusker says. “I’ve had enough of your silence.”

McCusker is referencing types of women who appeared on the show, which aired from 2009 to 2012, referring to them by jargon created and used by the castmates.

Pauly “DJ Pauly D” DelVecchio, one of Jersey Shore’s cast members, told Vulture a “grenade” refers to an unattractive woman. The term “rocket launcher” or “grenade launcher” is of similar use to reference an unattractive woman who is “brought along to make a grenade look better by comparison,” according to In Touch Weekly. Additionally, to reference having sex, the castmates often used the word “smush.”

In the video, which has been viewed more than 1.5 million times by Monday, McCusker shows a clip of a Jersey Shore episode in which a woman gets arrested.

After a commenter mentioned a Reddit thread made by an alleged former producer of Jersey Shore, McCusker made three follow-up videos in which she reads through the thread, which consists of the anonymous alleged producer answering questions about the show.

Many viewers in the comments section of McCusker’s initial video said they are also fans of the show and hope women come forward.

“I’m hoping the algorithm brings me joy over the next few days with people responding to this,” one person wrote.

“Packing my bags. Moving to this side of Tiktok,” another commenter wrote.

Others doubted women would come forward.

“I assume that many of these girls have moved on-got married and have kids. Not sure many will spill that tea,” one commenter said.

In an email interview with the Daily Dot, McCusker said she decided to post the video after recently rewatching the series. She said her perspective on the show has changed now that she is an adult.

“When I was watching season one I was just thinking to myself like ‘holy cow, the way these women are portrayed and talked about, or what they subjected themselves to, to be displayed in such a public nature would never fly now. I NEED to hear from them!!’” McCusker said.

McCusker said she does not know for certain that NDAs were used on the show.

“I just assumed anyone featured on the show needed to sign an NDA, especially since no one has really heard a peep about behind the scenes as far as I know,” McCusker said.

Despite the traction the videos have received, McCusker said no women have come forward yet that she knows of.

“Some people in the comments say they have friends or family members that have appeared on the show, but no good juicy details yet,” McCusker said. “My fingers are crossed.”