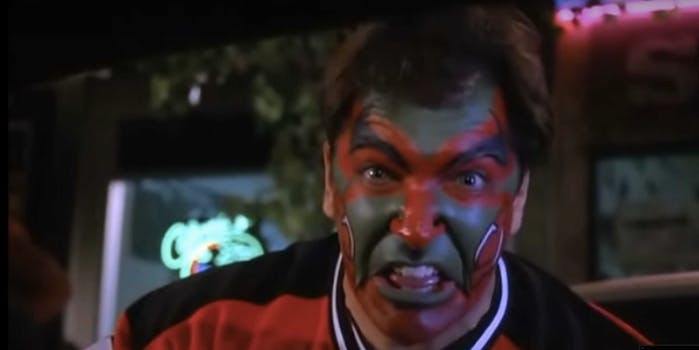 Did this photo finally capture the infamous Jersey Devil?

Maybe it's just a really evil goat that won't die.

The Jersey Devil, a mythical bipedal creature with a goat head and wings, has been spotted through the years in the mid-Atlantic region of the United States. Tales of the beast date back to the 18th century, when it reportedly impregnated Deborah Leeds with her 13th child in Atlantic County, New Jersey. A rash of sightings occurred in 1909 in the New Jersey/Delaware region, and have occurred sporadically since.

Though sightings have been frequent, no verifiable photographic documentation of the Jersey Devil existed. Until this video, unearthed by NJ.com:

Sure, you might think that this video, taken by Emily Martin, looks like a toy thrown through the air with animated wings added to it in post production. But what if we also showed you this picture taken by Dave Black in Galloway Township?

OK, that’s a goat thrown in the air with wings on it. Or perhaps the wings are robotic. It’s not even a biped. And maybe to you this makes this Jersey Devil sighting another in a long line of hoaxes. But who’s to say that the Jersey Devil itself is not merely a horrifying robot creature that traveled through time to impregnate a witch in the mid-Atlantic for reasons well beyond our human understanding? Or maybe it’s just a really evil goat that won’t die.

You’re right, that’s ridiculous. This is just another hoax. There remains only one video of the Jersey Devil to be trusted: