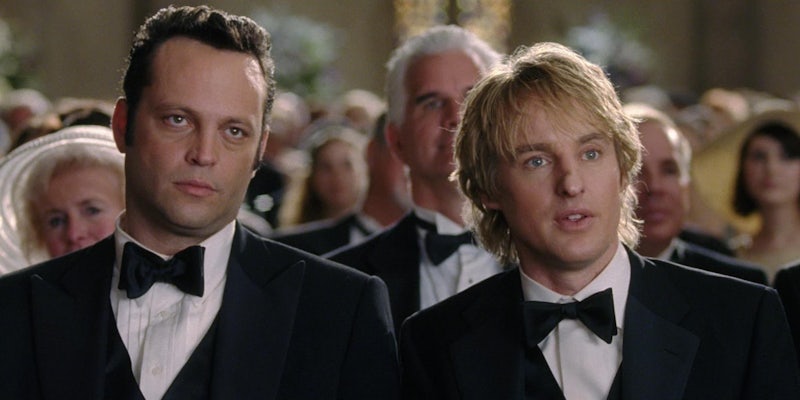 No matter how rich you become, there’s nothing better than an open bar. Jeremy Renner knows what I’m talking about. Coming off the record-breaking opening of Avengers: Age of Ultron, Renner reportedly crashed a Houston wedding reception—for 15 minutes or an hour, depending who you ask—and made a beeline to the bar, like any other multi-million dollar movie star would do at a stranger’s wedding.

Unlike traditional unannounced celebrity appearances, though, Renner did his best to avoid attention by declining photographs with the bride, groom, and the rest of the attendees. He told TMZ he didn’t want to steal the spotlight from the newlyweds. Don’t worry, Jeremy Renner: You still did.

The Hurt Locker star’s spontaneous appearance, at best, shows just how strangely out of touch Renner is. An anonymous Joe like me, who could get away with sneaking into a wedding without anyone noticing, knows that crashing events is not something you do. (If you do it, you certainly don’t brag about it to the entire Internet.) His general aloofness has become something of a meme on the Internet of the past few months, following his not one, but two instances of calling Black Widow a slut, all while laughing his way to the bank.

It’s time for celebrities to cool it with the wedding drop-ins already. While Renner might have just wanted a free drink, these celebrity appearances are tinged with a disingenuous air of altruism or the requisite “OMG, they’re just like us!” headline one might find in US Weekly, something outside Renner’s area of expertise. (He’s a great actor but a horrible celebrity.) So, to Renner’s favor, at least he’s not projecting a false image of himself as charitable Hollywood saint.

So many celebrity sightings that result in some sort of stunt, whether it’s well-intended or cocky and rude, reek of calculation on the part of the celebrity. When they perform a good deed, it feels like a photo op—from John Travolta, who had a cameo at a Georgia wedding in 2013, to last year when Beyoncé and Jay Z crashed a wedding in Italy. Celebrity wedding crashing is reaching critical mass. Rebecca Rose of Jezebel writes:

One day, the entire world will be just be an empty abyss, filled with nothing but celebrities randomly crashing weddings. They will leave nothing but devastation in their wake. We will be terrified of them, hunkered down in our bridal suites, with only copies of OK! Magazine to keep us warm while fearfully keeping an ever-vigilante eye out for another famous person who wants to accidentally surprise us during our nuptials.

Although Queen Bey and Jay-Z’s appearance was an accident, according to the Daily Mail, celebrity viral stunts do little more than serve the marketing narrative of the star making the appearance.

Maybe it’s just the nature of the time we’re in, but Bill Murray stars in more viral headlines than he does movies these days. The king of the drop-in, the mythological Murray has been known to crash bachelor’s parties, weddings, engagement photos, and even once thwarted a bank robbery. Sure, Murray is a drunken vagabond, but aside from accidental vigilante justice, I can’t see what good his appearances are doing. Are they serving as a way to keep his name alive, a longform practical joke, or both?

Of course, Bill Murray has nothing on Taylor Swift, who has made this sort of thing into an art form. The world’s BFF has made headlines in the past for her public “spontaneity,” most prominently of which she gave a teenage fan $90 to eat a fancy dinner on her birthday.

So many celebrity sightings that result in some sort of stunt, whether it’s well-intended or cocky and rude, reek of calculation on the part of the celebrity.

Swift, who was walking through Central Park, was spotted by the teenager who was rowing with her friends. So excited to see Swift, the fan hopped out the boat to greet her idol, flanked by photographers. The girl told Swift about their plans to continue their celebration at a nearby Chipotle, to which the pop star objected. She reached into her purse and grabbed a wad of cash, telling the teen to have a fancy dinner instead. The story went insanely viral.

I couldn’t help but wonder, what if the cameras weren’t there? What if she weren’t on a Rolling Stone interview? It all seemed so contrived. Celebrities are among the richest people in the world—with unfathomable access to resources to actually affect some change. However, all they really need to do is perform some mild gesture to earn a reputation for being giving and generous, just so long as it’s clickworthy.

What’s interesting about Taylor Swift is that she doesn’t need the help of the Internet to appear philanthropic. She already is. Swift came in first on DoSomething.com’s “Gone Good” list—a ranking of celebrities who’ve made good use of their millions, donating to worthy causes—for making quite a generous contribution to New York City public schools this year. Swift announced last fall that she would donate proceeds of her single, “Welcome to New York,” to the city’s school system, and she made good on that promise with a $50,000 donation.

Perhaps the most well-intentioned and ubiquitous, but profoundly annoying, last year’s “Ice Bucket Challenge,” a stunt used to raise awareness and money for ALS research, gained momentum with each viral video of celebrities dumping cold ice on their heads—in lieu of donating $100 to the research. From Chris Pratt to Justin Bieber, celebs out-iced each other left and right.

Even though it raised awareness for the disease, I found it odd that they simply couldn’t donate to the cause. Sure, dumping ice on your head is funny, but since when did laughter help cure anything?

Amid the clunking of the ice cubes, one notable actor stepped to the plate, pointing out the absurdity of the challenge. In his video, Patrick Stewart is seated in a low-lit hotel room, writes a check for an undisclosed amount, takes some cubes of ice from his bucket placing them into an old-fashioned glass, pours whiskey, and raises his glass.

More recently, Stephen Colbert made headlines for something other than his upcoming Late Show gig. The former faux-conservative announced in early-May that he would fund every existing grant request made by public school teachers in South Carolina. Colbert’s donation amounted to a sum of $800,000, making a noticeable impact on the schools in his home state.

I couldn’t help but wonder, what if the cameras weren’t there? What if she weren’t on a Rolling Stone interview?

Noted wedding-crashers, Beyonce and Jay Z, used their wealth where it mattered during the unrest in Baltimore and Ferguson after the death of Freddie Gray. The couple reportedly gave anonymous donations to the #BlackLivesMatter protestors to help them make bail, as many were arrested during the demonstrations.

Celebrities have the power to make this change, and it shouldn’t just be about the headlines. We don’t need celebs to pop in and out of weddings to show us how “cool” they are. Instead, they should be cool by using their power and wealthy to help everyone who lacks their same privileges.

It may take some time for Jeremy Renner to figure out how to use his celebrity status for the greater good. But I’m sure if we ever need him, we’ll find him at the nearest open bar.