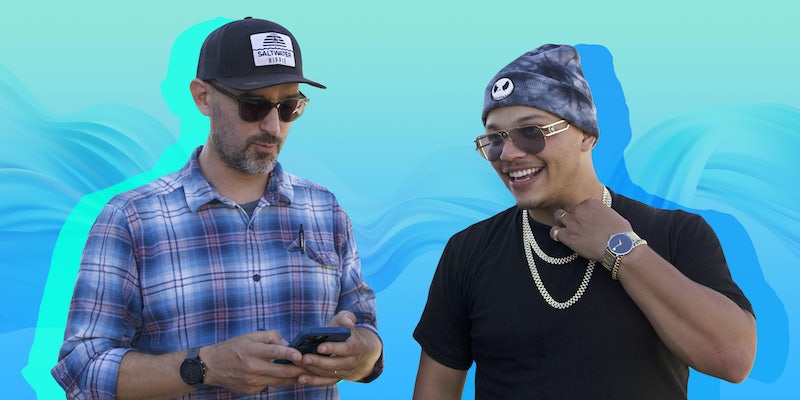 ‘We want to make sure that this partnership's going to work.'

We’re sitting down with leaders on the business side of the creator economy to get their best advice for creators looking to launch and develop their careers. This week, we spoke with Aaron Godfred, vice president of JellySmash Productions, creator company Jellysmack’s new production division.

In an interview with Passionfruit, Godfred spoke about the development of the new production service, what kind of creators it attracts, who qualifies for the program, what qualities he looks for in potential clients, what advice he has for creators who don’t yet meet JellySmash’s requirements, and more.

Whether it’s because of burnout or a desire to scale their businesses, many creators hire editors, producers, managers, and third-party companies to assist with their workload. One of those companies is creator-oriented company Jellysmack, which has made a huge splash in the creator economy ecosystem and is expanding its repertoire of services to include a new content production division for creators, JellySmash Productions.

As previously reported by Passionfruit, Jellysmack is a company that aims to help video creators with audience growth through multi-platform distribution, funding, and data and AI-driven content strategy. Video creators can apply to Jellysmack’s Creator Program, which supports long-form and short-form video creators in translating their videos to platforms like Facebook and Snapchat. In August 2022, Jellysmack also launched a new finance division, JellyFi, which provides investment funding for creators.

JellySmash Productions is a production service launched by Jellysmack publicly in October 2022. A select group of creators can use the service to create customized content for YouTube, Facebook, Snapchat, Pinterest, and other social media platforms. JellySmash touts that it can meet creators in person and produce “two months’ worth of original long-form video in less than three days.”

Thus far, JellySmash has worked with creators who are already a part of Jellysmack’s Creator Program, including SpicyyCam, Charles & Alyssa, Karina Garcia, and Pasta Queen, in a pilot program for the new production division. Aaron Godfred, vice president of JellySmash, told Passionfruit JellySmash tends to look for creators with over 5 million followers.

In potential clients, Godfred said he looks for on-camera presence—which, he said, is the ability to perform, entertain, and sustain audience attention. In addition, Godfred said the production service is great for short-form TikTok creators who want assistance building out long-form content.

“What we really strive to do is to get inside our creators’ heads, understand the types of content they get excited about, get under the hood of their analytics, and understand what works,” Godfred said. “They’re excited about new ideas we can bring to them to help them broaden their portfolio of videos.”

While there is no upfront cost for JellySmash’s services, the company has not publicly announced what percentage of video revenue it requires from the videos it helps create. When asked by Passionfruit, Godfred declined to share what revenue percentage the production service typically takes.

“We take on the financial risk of the content production or development, production, post-production performance marketing. … And then it’s a revenue share. We try to keep things really simple and straightforward,” Godfred said.

One creator who participated in JellySmash’s pilot program is food creator Cam (@spicyycam_), who has over 19.8 million followers on TikTok who tune in for his spicy food challenge videos. He’s also developed an audience of over 4.3 million cumulative followers across YouTube, Snapchat, Facebook, and Instagram. Cam told Passionfruit he has been posting his short-form content on multiple platforms for a while now but wanted to build out a long-form content strategy with JellySmash.

When asked if he had any advice for creators who want to negotiate a fair deal with JellySmash for revenue splits, Cam said: “Always value yourself the way you feel is fair, Jellysmack will honor that and find a way to make everyone happy as long as you are honest and open with them about what you want.”

“If you focus on your brand and build the creation you ideally want to see then it will reach the right people. Jellysmack really watches what’s going on right now so I’d say if you wish to work with them, focus on things that will make your content go viral and be as trendy as you can be,” Cam said.

Godfred advised creators who don’t yet meet JellySmash’s program requirements to look for inspiration from others who are sharing tips for creators on how to succeed in the field, like YouTube advice gurus Paddy Galloway or Jay Alto.

“I would start by following some creators that you admire. I feel like there’s a whole new kind of crop of creators that have really come to prominence in the last year. … Their content is essentially creator instructions, creator inspiration, and the secrets, as much as anyone knows, about how to create content and leverage the best practices on these different platforms,” Godfred said.

Godfred also advised creators to post consistently and not to expect success to come overnight.

“I’ve seen with small creators that if you stick with it, and you create content that you feel good about, and you’re honest with your audience and provide value to your audience, people will find you. These algorithms and platforms are designed to match viewers with creators, and it’s just a matter of time and you just have to stick with it,” Godfred said.

Godfred said JellySmash’s new production service aims to create content that aligns seamlessly with the content creators are already known for, and says, ideally, JellySmash will be an undetectable presence in the videos it creates. He also said this service may be ideal for creators who want to take time off without disturbing their typical posting cadence.

“They want to take some time off, but can’t because of the demands of the algorithm, or maybe they just lost an editor or producing partner. They’ve got a life event coming up that they’re looking to carve out some time for, perhaps a maternity leave. And so we can come in and over the course of, say, a two or three-day shoot, produce four, six, eight videos a day leveraging our professional production team, and then give them the content to be able to take that break and have a bit of a breather,” Godfred said.

Are you a business leader in the creator economy? Email [email protected] to share your company’s latest news.