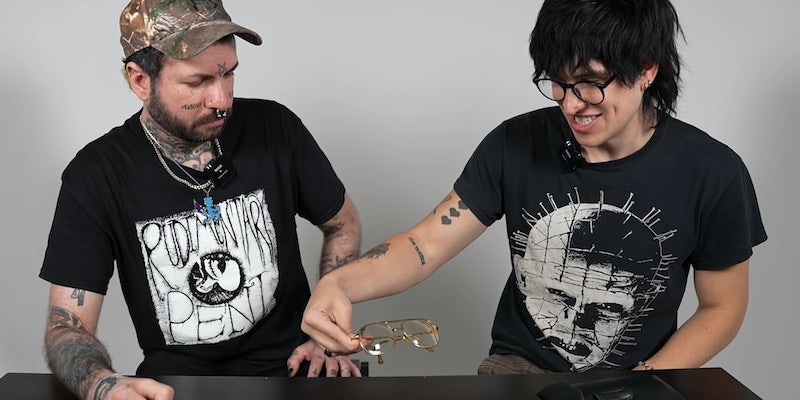 ‘None of that’s going to the victims’: Jeffrey Dahmer’s glasses are on sale for $150,000, and people are disgusted

Netflix's Jeffrey Dahmer dramatization has caused a surge in interest for the notorious serial killer.

Netflix‘s serial killer drama Monster: The Jeffrey Dahmer Story has reignited the debate over the ethics of true crime storytelling.

While many people found the series educational and emotionally affecting, others are accusing Netflix of exploiting the traumatic experiences of real people. It’s also sparked concerns about potentially romanticizing Dahmer as a fictionalized character—a criticism supported by certain responses to the show, with some viewers sympathizing with Dahmer or cracking jokes about enjoying the morbidity of “true crime fandom.” So when the news broke that a pair of Dahmer’s glasses are up for sale, the reactions on social media were predictably disgusted.

The glasses currently belong to Dahmer’s father’s former housekeeper, who came into possession of several Dahmer-related items. They’re being sold via a private collector specializing in true crime memorabilia, with an asking price of $150,000. And since this sale clearly capitalizes on the popularity of the Netflix show, it’s a very obvious example of someone profiting from Dahmer’s crimes.

Commenters were quick to criticize the sale on Twitter and TikTok, with one popular TikTok highlighting the fact that this is an explicitly for-profit sale: “Should some of the money at least go to the victims’ families?”

Meanwhile on Twitter, people highlighted this as evidence of Dahmer being glamorized in the public eye.

“This let you know how they praised this man for Killing and eating Human Beings especially Black Gay Men,” reads one typical response. Another wrote, “Selling an item that was worn by a racist necrophiliac and serial killer who also happened to be a pedophile is very odd, I won’t lie.”

Others were grossed out by a Daily Beast headline suggesting the glasses could be “the perfect accessory” for a Dahmer Halloween costume. “There were congressional hearings about whether rap was undermining our society by glorifying crime,” remarked The Hill reporter Zack Budryk, pinpointing the weirdness of gory true crime dramas being seen as mainstream entertainment.

Dahmer’s glasses are a perfect symbol of the controversy around true crime fandom. They’re a very distinctive accessory, and prior to the news about this sale, there were already numerous TikToks that either used Dahmer’s glasses as a punchline, or treated them as a quirky kind of accessory. For instance, here’s someone modeling a pair of similar glasses, with the caption, “if Jeffrey dahmer did one thing right it was his sense of style in glasses.” You’ll also find people joking about accidentally looking like Dahmer, or simply posting selfie videos with the caption “dahmer.”

In other words, those vintage wire-frame glasses are probably more recognizable to the general public than any one of Dahmer’s individual victims. They’re a marketable brand. So even if Dahmer’s fans and sympathizers make up a small minority of the audience, this Netflix show still has created more opportunities for people to commodify his crimes.