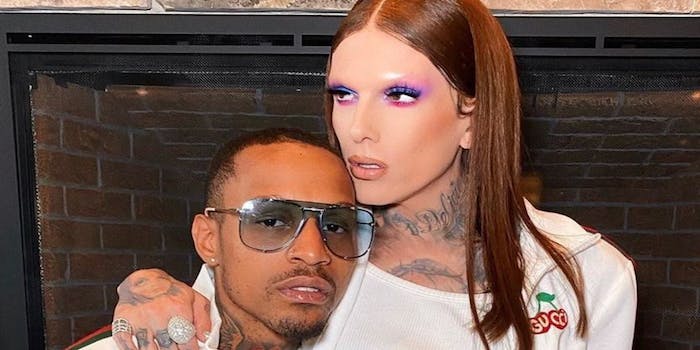 The beauty guru went public with the accusations.

It seems like only yesterday when news broke that Jeffree Star had a new boyfriend. The famous YouTuber and makeup guru posted a discrete debut with his new beau back in August, which sent the internet to do some digging. Shortly after the steamy photo surfaced, it was confirmed that the mystery man in the photo is professional basketball player Andre Marhold. Nearly a month later the couple seems to be having trouble, considering that Star just accused Marhold of stealing from him.

“Hey! Since you can’t answer the phone right now, can you give me all the stuff back that you stole from my house?? What kind of lowlife fucking scum does that? Give it back!!!! If you need a return label, just ask,” Star commented on Mathold’s Instagram this week, which seems to be temporarily deactivated. However, Hip Magazine screenshotted the comment before the page was removed.

Marhold is Star’s first public boyfriend since his breakup with long-term boyfriend Nathan Schwandt. The pair was an item for five years and often appeared in Star’s YouTube videos. Amid the theft news, Star has removed all photos with Marhold from his social media, except for their debut pic, and posted a message on his Instagram Story yesterday that suggests the relationship is severed: “Every time I start trusting someone God slap the back of my neck with a sandal.” In another Instagram Story video, Star shows off a new purchase from Louis Vuitton which he can be heard saying “Well, this is not stolen…” before introducing the product to his followers.

In a recent post from Twitter user @defnoodles, screenshots of Marhold replying to Star has caused people to question the authenticity of the accusation and wonder what secret he is holding about Star. “You miss Nate, but you fucked his friend. I don’t understand. You didn’t even tell your supporters you hit me up offering all these expensive things for my time. I have proof of what I posted I have your name on paper work your name on pill bottles etc. we can do this all night,” the Instagram Story read. Two other posts stated that there is information to be leaked and that things “can definitely get worse.”

It seems this drama will be ongoing, which isn’t anything new for Star who spent the summer wrapped up in Dramageddon 2.0.