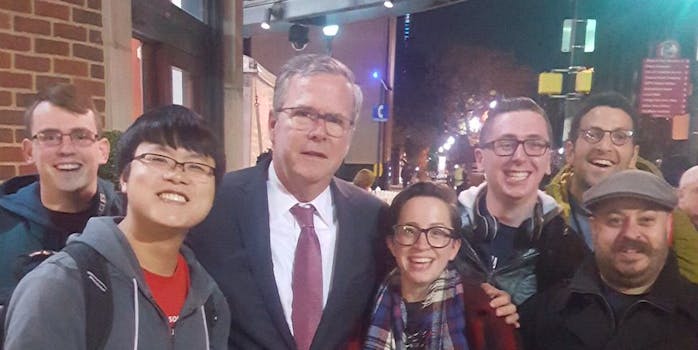 Last night, a group of young people in Philadelphia walked out of a meeting for the Democratic Socialists of America (DSA) to find none other than former presidential candidate Jeb Bush.

The group requested a photo with Bush and ended up with internet gold.

According to the post, Twitter user @flexlibris shouted “socialism” in the moments before the photo was taken. Safe to say Bush, who served as Florida’s Republican governor from 1999 t0 2007, was taken off-guard. The photo perfectly captures the moment the statement hits him, immortalizing the crestfallen look on his face.

This photo will surely live in perpetuity alongside his painful request for people to “please clap” during a rally speech in 2016.

The icing on the cake came in the moments after the photo was snapped. Bush asked @flexlibris “how are you gonna pay for socialism,” to which they responded “rich people like you!”

Bush had his fair share of viral moments during his ill-fated 2016 run for president, and this is sure to join them in the annals of history.

While the internet is certainly happy about it, Bush is likely regretting agreeing to the photo in the first place.

Update 9:45am CT, Nov. 9: The Daily Dot spoke with Alison Macrina, who posted the photo. She said she and a group of comrades were walking out of a DSA meeting when they spotted Bush.

“Someone yelled ‘Jeb!’ and we all played along for a little while and pretended we were into him.”

The moment his aide went to take the photo, Bush asked the group what they were meeting about and they yelled ‘”socialism,” creating the opportunity for this priceless photo ‘s creation.

Macrina added that she encourages people to “do this when they see the ruling class in the streets. They deserve no peace.”