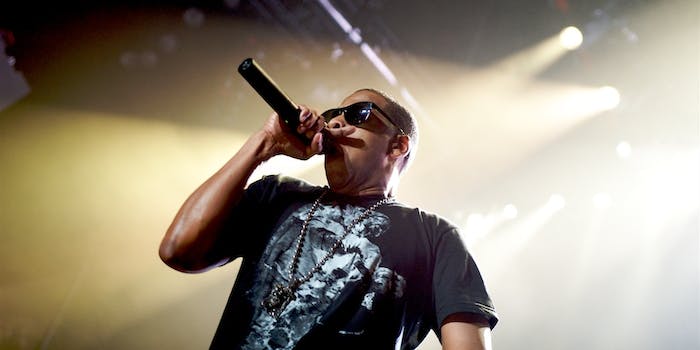 Just because Jay Z and Madonna have a public platform doesn't mean they have to use it the way you want.

The recent press conference, TV spots, and viral marketing campaign for the Tidal music streaming service all include some extremely major players of the contemporary music industry. Under the leadership of Jay Z, who acquired and re-tooled the service that is meant to compete with Spotify and other music providers, these megastar Tidal stakeholders assembled to spread their message of #TidalForAll.

There are certainly legitimate points raised about the need for an artist-driven streaming service, given the difficulty the music industry (like many other industries) has had in adapting to the digital age. Streaming and pirating have taken money out of artists’ pockets, so good for them if this is somehow the beneficial deal that they’re presenting it as.

The presence of these superstars promoting Tidal led a number of people in my social media feeds to ask how “they can be vocal to promote a streaming service but have nothing to say when it comes to social justice issues.” Whether people inquired about how they could remain silent on “real issues” or “activism,” the sentiment was the same: How could they?

Easily. Pop stars are simply under no obligation to also be activists. Sure, it would be nice if celebrities of this caliber, who get people’s attention even when they may not want it and whose every word can be amplified, could use that opportunity to also share social justice ideology that moves society forward, but the truth is that not everyone subscribes to an ideology that will move society forward; in turn, does having a recording contract or number-one singles require activism.

Pop stars are simply under no obligation to also be activists.

The #TidalForAll rollout definitely aped some of the characteristics of a social justice campaign, with people changing their Twitter avatars and using the hashtag and its implied call for solidarity. But make no mistake: This was a group of musicians doing their job as musicians, which is selling their music for money.

There have always been stars who were also activists and stars who were not, just like there have always been gossip columnists and paparazzi and all sorts of other things that can feel particularly post-millennial. The difference is access, which has created inflated expectations. The prevalence of previously private thoughts being thrust onto our screens and smartphones every nanosecond has desensitized us to the idea of privacy.

Add celebrity worship culture to this, and you’ve got people wondering what their fave celeb is thinking every moment, and some celebrities give it to them. Anything of significance happens in the world, and you’ve got people rushing to tweet and post about it on social media. Celebrities’ takes are given more weight by those who put them on a pedestal, and we find ourselves in a bizarro world where this brilliant decade-old Dave Chappelle bit is now unironically true.

If you can open an app on your phone and see (what appear to be) the deepest thoughts and feelings of [X Celebrity], then why has [Y Celebrity] remained mum on Ferguson? How dare [Q Celebrity] not weigh in on Indiana’s “religious freedom” law?

Because they don’t have to, that’s how. I will reiterate that in some instances it would be nice, but I’ve got a long list of things that “would be nice” and are not going to happen.

First of all, lots of those “personal” thoughts your favorite celeb is posting on social media may be carefully curated, edited, or fully ghostwritten. Those intimate selfies may be professionally staged or photoshoppped, all packaged to serve marketing, not intimacy. I’m not knocking this sort of commerce at all—in fact, I salute those who are able to cunningly use social media to market themselves.

It’s when the consumers mistake themselves for confidantes and think they get to make topical demands that things go awry.

Also, it’s an ugly truth, but unless you know someone personally, you don’t know what they have at stake in their personal or professional lives. Taking a strong stance on a political issue is not a risk everyone is willing to take—or even interested in taking. That may be disappointing, but that’s the truth.

Lots of those “personal” thoughts your favorite celeb is posting on social media may be carefully curated, edited, or fully ghostwritten.

There are celebrities who are so happy and grateful to be where they are that they don’t want to speak out on social injustice and the bleak truths that come from current social issues like police brutality and bigoted lawmakers. They’ll gleefully tell you that they don’t have to, and as much as that can sting sometimes, they’re right.

If someone, particularly someone who might have lived those bleak truths before making it big—who came from poverty or close to it—now has the luxury of…well…luxury and chooses to not speak publicly as an activist, congrats to them.

As a performer and a writer, I have never had that luxury. I speak out on certain issues, and I know I’ve suffered professionally for it. I’ve had people with far more professional success tell me they could never be as “brave” or say certain things I’ve said publicly. That is not to insinuate that I am actually brave or that they are weak; just that we all make our choices, and I genuinely understand theirs.

Not only are we not on the same plane because I’m not a celebrity, but my choice to say stuff is mine, just as someone’s choice not to is theirs. No judgment. It’s the people who make demands of those who have made it clear that activism is not their lane that I have trouble with.

Imagine if a pop singer was also a great baker and provided cookies and cakes at every concert. Would you then get angry and demand that every other singer bake too? Or question why they didn’t?

Besides, how often does a celebrity make a public statement about social justice or activism that actually does more harm than good? How often are we then left to parse the content of their statements and question their meaning and motives? I’ll start with myself, when I did just that regarding Madonna’s questionable statements just a few weeks ago.

Whether it’s an R&B singer whose music I loved stepping forward to defend Bill Cosby against his rape allegations or the bubbly sitcom mom who has shockingly conservative political views, social media and invasive interviews have pulled back the curtain to reveal so many entertainers whose work I had admired to be people whose politics and opinions I detest.

And that is perfectly OK, because I don’t need to know your political affiliations to enjoy the way you get busy on the beat. However, once I do know, if they’re in deep conflict with my own beliefs, my enjoyment of your work may be diminished.

Reconciling an artist’s work with other things we may know about them is everyone’s individual process, and it’s daunting enough when we didn’t ask for their political views in the first place. I just don’t know how people can beg stars to speak out when we’ve seen so many try and royally fuck it up.

Sometimes we’re made privy to a celeb’s social or political leanings in an interview, which may happen in the course of them doing their job as an entertainer, and a sort of accidental activism or social justice blooper happens when quotes are rapidly shared the way they are today.

There are a dozen ways to sidestep an interview question you may not be knowledgeable about or that you don’t want to publicly engage, and in choosing between giving a graceful/charismatic interview or being a social justice warrior, guess which one I deem closer to the desired skill set for a professional entertainer?

It’s when the consumers mistake themselves for confidantes and think they get to make topical demands that things go awry.

Also, many people adhere to the Biblical tenet that good deeds are done in secret, so we may have no idea exactly what “good deeds” and social justice a celebrity supports without doing a little research. There are philanthropic advisors and entire charitable organizations in place that a celebrity may not choose to tweet about, and that’s OK, too.

I say, let’s honor the celebrities who are using their considerable voices for good without making demands of those who are not. Let’s offer critique like my reference above when a misstep is made, with the hope that we can all move forward together.

For every Beyoncé and Taylor Swift, proudly owning the “Feminist” label, there’s a new starlet each week publicly declaring that they’re not a feminist. So thank you, Beyoncé and Taylor Swift. Thank you Jesse Williams, for being so eloquently vocal about racism and injustice via social media that your heartthrob status on Grey’s Anatomy and your dreamy good looks have become the least attractive things about you. Laverne Cox could easily “just” be a working actress and enjoy her prominent role on the widely adored show Orange Is the New Black, but she’s also chosen activism from the start, promoting trans visibility across multiple platforms.

We can thank those who do without condemning those who don’t. Lots of actors and other celebrities have also chosen activism, some even have transitioned into roles in government. Until they do, they really don’t need to weigh in on every single issue.

And there’s always the option of looking toward actual activists for activism. They may not be all sparkly or on a red carpet, but they make pretty good American Idols.

Photo via matthew_harrison/Flickr (CC BY ND 2.0)