Binge TV is the new black

Bingeing on a TV show used to be something you'd only do when home with the flu. Now it's how we want to consume TV all the time.

“The world of 7:30 on Tuesday nights, that’s dead. A stake has been driven through its heart, its head has been cut off, and its mouth has been stuffed with garlic. The captive audience is gone.”  —David Fincher

You’re at the local organic micro brew coffee shop with the insanely cool barista whose piercings are outnumbered only by his tattoos. How often have you overheard a conversation that goes something like this:

Hipster One: So, have you been watching Justified?

Hipster Two: Are you kidding me?  This beard wasn’t planned, my friend. It was grown by necessity when I tore through the first three seasons over the weekend.

Hipster One: Nice. Did you love it or what?

This is what we call binge viewing, and it was born at the same time as the words “the complete first season” were printed on a box of DVDs back in the nineties. When the studios first realized that they could sell box sets of retired TV shows, they had no idea how they’d be consumed. Starting back then, people began to choose to take in a TV series marathon style—everything at once, no holds barred.

Today, binge viewing is so much a part of the zeitgeist that Portlandia based an entire episode of their show around Fred and Carrie’s characters binge viewing all seventy three episodes of Battlestar Galactica. Now there’s been another subtle yet revealing shift in not just how how episodic content is being consumed, but in how it’s presented. Off to the side of the main Hollywood apparatus, Netflix is making waves with its release of the series House Of Cards, and the soon to be released Arrested Development, in a brand new format, custom built for binge viewing.

House of Cards proved the new binge viewing model with a giant slam dunk. All thirteen episodes of season one were released on the same day. The response was resoundingly positive—fans watched the series in big, giant chunks, devouring it like the addiction it was, cheering on their ready fix. Netflix still won’t release actual numbers, but an informal poll from Wired put the number of views who binged on the whole series up as high as 38%. With countless articles and satires written on the subject, it’s clear that audiences and critics alike loved the show and more to the point: devoured it wholesale.

Whether we’ve been buying the DVD box set, DVR-ing a full season of our favorite show on our DVRs, ordering from On Demand in bulk, or just streaming an old show from Netflix or Amazon, we are more and more an audience who wants our programming on our own terms. This is not a new idea. What’s interesting, though, is to see that those terms are pretty hard core. It turns out we actually prefer to binge view.

Once something you might only confess to after a bout of the flu, watching a season or two of a TV series over one weekend has become something of a badge of honor in the world of TV fandom. You just spent three days without sleep getting caught up on Mad Men before the season premiere? Respect. 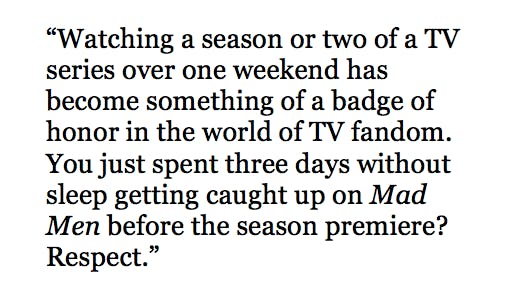 But that’s just the front side of the globe. Turn it around and you see the gears that make this thing go: the production of episodic television. I can tell you first hand, this is not a machine that was designed to move at a speed of thirteen episodes that go to air all at once.

Episodic television, especially of the hour-long drama variety, is a big, slow turning beast of a machine, but it’s built on a protracted time line that allows it to—however slowly—adapt to its audience. When you’re in the writers room of a show that’s been on the air for 4-5 weeks, you start getting an amazing amount of feedback from Twitter, Facebook, fanpages, and bloggers—all telling you how the core audience is liking, or not liking, the direction the show is going. Even if a show creator is saying publicly, “Oh, I don’t listen to that stuff”, believe you me, the writers do. They’re all out there gathering intel, trying to make sure they have a gig next season. Writers are typically only two or three episodes ahead of the air date, so if the ratings are low and the audience is grumbling —they can adjust. They can tinker, they can… get it right. The fans win, the sponsors win, and the writers get to keep their jobs.

The Netflix “all-at-once” release, while exciting for viewers who want it all, has taken away the change-as-you-go workflow of traditional episodic TV. It’s hobbled the feedback link for writers and creators in a way that demands an extremely deft and confident hand at the helm. Undoubtedly, this can only help to weed out the weaker links, those shows you see and think, “How did this get made?”

Could writers and producers adapt to this new, instant death model of create-it-all-at-once? Sure. A lot of very comfortable union guys are gonna complain for a while, but in the end, they’ll get used to it. Just like those self checkout lanes at the grocery store. And if Netflix is any indicator, those days coming sooner than later. But when a show must rise and fall on its own vision, without any chance to adjust the tiller, it’s going to change not just the way shows are greenlit, but ultimately the way they are created and conceptualized from the ground up.

There are a few examples of this already, even though they haven’t given over to the all-at-once release schedule. Shows like Breaking Bad and Mad Men, as well as pay cable series on HBO have been writing and shooting entire seasons at once, but the release schedule is still locked into the old once-a-week tradition, much to the grumblings of the audience. Because they’re not “writing-as-they-go,” these shows are forced to work in sequential order; write them all, shoot them all, then air them, and the protracted timeline is something fans have been having a hard time keeping quite about. Breaking Bad fans, for instance, were made to wait an entire year before they could finally watch the second half of season five… Now that’s asking your fans to really hang in there.

Would these fans be happier if AMC just gave them the rest of the show all at once, or do they like the squirming in anticipation? Netflix has said publicly that their goal is to unseat HBO as the King of High End Episodic. But would HBO even dare to pull a page from Netflix’ book and offer up a full season in one go? For now it seems, HBO, AMC, and Showtime are all betting no. But Netflix, and Amazon—rumored to be taking a similar all-at-once tack with its new slate of programming—are banking on a firm yes. Binging, it seems, is here to stay.

What lies ahead is a continental shift in how episodic storytelling is done. No longer constrained by the requisite episode ending cliffhangers, time sucking “previously on…” plot explainers, or the minute-by-minute fan feedback on Twitter to measure up against, writers and show creators will be stepping into a more purely creative and bolder era. And yes, it will also be more risky, because it will be place where what they create, for better or worse, will have to stand on its own… at least until next season.