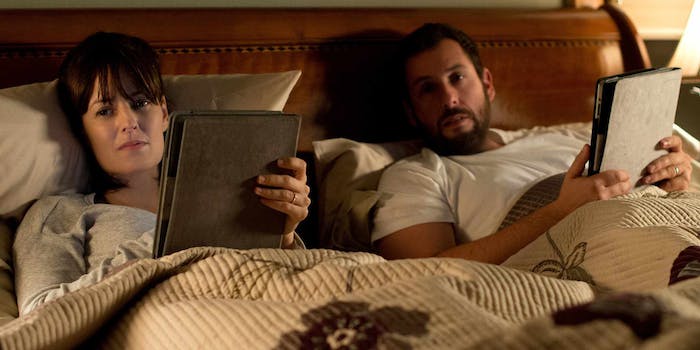 Hollywood has long struggled to represent pornography in nuanced ways. Here are the worst examples.

Last weekend, Jason Reitman’s Men, Women & Children rolled out to semi-nationwide release in order to warn America that the Internet is ruining their lives, whether with online gambling, video games, or pornography.

In an interview with Time magazine, Reitman called Men, Women & Children a sort of horror movie about people “in search of intimacy” online. “We just desperately want to connect, and we’re doing in it perhaps in the wrong ways,” Reitman said. “I have a daughter who’s going to turn 8 next month. She is one innocuous search query away from seeing stuff and learning stuff she simply doesn’t need to know yet. I don’t think there’s time to list the amount of fears that come from the Internet and how it affects our intimacy, our sexuality, and our communication.”

However, Reitman’s statements speak less to an understanding of the effects of technology on society than a generalized anti-pornography fear that has long plagued Hollywood. From Joel Schumacher’s 8MM to the abysmal Nick Swardson vehicle Bucky Larson: Born to Be a Star, Tinseltown has long struggled with representing pornography in nuanced and meaningful ways. Not every movie can be Boogie Nights.

Of Hollywood’s many anti-Internet pornography sermons, here are 5 of the absolute worst examples, presented in no particular order.

Directed by 12 Years a Slave’s Steve McQueen, Shame earned critical acclaim for its powerful performances and McQueen’s masterful work behind the camera. However, there’s only so much McQueen and star Michael Fassbender can do with a Psychology 101 script that equates sex addicts to a bunch of sister-diddling crysterbaters.

In the movie, McQueen plays Brandon, a faceless corporate drone (akin to Patrick Bateman, except that he doesn’t murder women in his fantasies) who makes up for his meaningless existence by getting his jollies off on the Internet, in the bathroom, and with anyone who will consent. What are the roots of his addiction, you ask? The script by Abi Morgan (who also wrote The Iron Lady, a biopic all but written in crayon) suggests that Brandon’s desires are a manifestation of his attraction to his twin sibling, whose actual name is Sissy, an unstable lounge singer who dresses like Liza Minnelli by way of Rita from Arrested Development.

If that’s not simplistic and regressive enough for you, later scenes in which Brandon satiates his thirst for sister flesh through a sexual nervous breakdown is a real doozy.  “The climax is, for Brandon, a chaotic downward slide that blends provocation with a scolding, breathless moralism,” the New York Times’ A.O Scott explained. “How far will he go? He’ll have sex with a man! With two women!” Of all people, James Franco particularly called out the film’s depiction of gay nightlife. “It’s depicted like the seventh level of hell,” Franco said. “I mean, it goes back to the horrible representations of gays in the 70s, where the gay club is meant to signify everything dark and depraved.”

When James Franco knows your movie has a problem, you’re clearly doing something very, very wrong.

If you’re browsing for something to watch on Netflix, a good rule of thumb is to search out the documentary section. Every genre has its duds, but the average documentary is usually of higher quality than your average narrative film, simply because documentaries don’t have to think about playing to the Transformers crowd. Unless your name is Michael Moore, you aren’t likely to make much money off of documentary filmmaking, so if you hope to find an audience at all, the damn thing better be halfway decent.

To remind you that Aroused has a lot on its mind, Anderson helpfully flashes quotes from Erica Jong and Anais Nin throughout the movie, all of which are more interesting than the film. For a movie that wants to be sex-positive, Aroused simply traffics in pointless, regressive stereotypes, while oddly objectifying its subjects. Anderson’s camera films each interviewee as if they’re posing for a shoot, but her camera is frequently shoved up their derrieres. But no wonder: Anderson seems to spend most of her time with her head up her own, so she might enjoy getting a view of others’ for a change.

In Christian Hollywood, there’s always something threatening to destroy the sanctity of the family. For Nicolas Cage’s recent Left Behind remake, it was the Rapture, but Kirk Cameron’s Fireproof views pornography as the real enemy of good Christian men. Fireproof is a subway pamphlet disguised as a movie, offering tired sermons on how to make a marriage work in modern society. The coupling in question is between Catherine and Caleb, played by the aforementioned Cameron as if he’s acting in one of his infomercials. That’s pretty much where the movie’s head is at.

Growing up, Catherine (Erin Bethea) always wanted to marry her father (yes, this is a real plot point), but instead she ends up with a porn-addicted firefighter (Cameron). Catherine wants a divorce, but her daddy has a better solution for Caleb: take up the mantle of Jesus with a 40-day Christian challenge called “The Love Dare,” meant to bring estranged couples closer together. In order to win his wife back, Caleb have to complete the Herculean tasks the challenge prescribes, thus, proving his love for his wife.

“The Love Dare is basically a notebook filled with a swarm of Bible verses and Ann Landers-like suggestions to help keep your wife from boning other dudes,” Cinema Blend’s Mack Rawden explained. “Caleb vows to surprise Catherine with a special little treat each morning, but unfortunately, she’s already beginning to emotionally detach, as she’s smitten with a backwoods doctor who’s down with other people’s pussy (yeah, you know him). With the help of his father and a fellow firefighter whose marriage is going swimmingly thanks to praying, Caleb perseveres and continues trying to woo the woman he loves.”

But don’t let the seeming heroics fool you: Fireproof hates women, as the A.V Club’s Scott Tobias argued. “Basically, the problem with Cameron and Bethea’s marriage is that he’s pissed off because his wife actually expects something from him, like extending a little kindness to her or washing a dish every once in awhile,” Tobias wrote. “And when Cameron gets in a rage, out comes the baseball bat.” This becomes very literal during an unintentionally uproarious scene in which Cameron beats up his porn-ridden computer with a baseball bat to save his marriage, even though getting rid of his computer won’t make him less of a jerk.

Next time, Kirk Cameron should just take a baseball bat to the script.

The film pretends to say a great deal about how pornography pervades our society, as we all turn one another into objects. But it becomes less about that and more an anti-tech screed that bemoans the ways in which the evil demons of the Internet are making intimacy and genuine human connection difficult to come by. Don Jon pretends to solve its hero’s conflicts when he shuts the laptop and falls for an older woman with a stock Dead Kid backstory (played by Julianne Moore), who hopes to teach him about the world. If the movie she’s in is any indication, she clearly has her work cut out for her.

5) The Girl Next Door

Enter The Girl Next Door, a mid-2000s teen comedy that offers a quick fix to every boy’s prom dilemma: Enlist your next door neighbor and her Pussycat Doll look-a-like friends to accompany you. It’s the classic boy-meets-girl story, except that the girl is a world renowned porn star and the movie she’s in has some pretty wonky politics. The Girl Next Door treats pornography more like sex slavery, in which the girl’s producer ex-boyfriend is a ghoulish thug who won’t let her leave the industry. (As Roger Ebert pointed out, her boyfriend-pimp must also be about 20 years older than her, which raises some interesting questions.)

The movie badly wants to be Risky Business, but that movie remembered that having a movie romance with a human woman means you have to actually write her a character. The Girl Next Door’s Danielle (played by Elisha Cuthbert) is a chalk outline of a person, and as Ebert pointed out, she lacks even basic consistency. “Danielle has two personalities: In one, she’s a sweet, misunderstood kid who has never been loved, and in the other she’s a twisted emotional sadist who amuses herself by toying with the feelings of the naive Matthew,” Ebert wrote. “The movie alternates between these personalities at its convenience, making her quite the most unpleasant character I have seen in some time.”