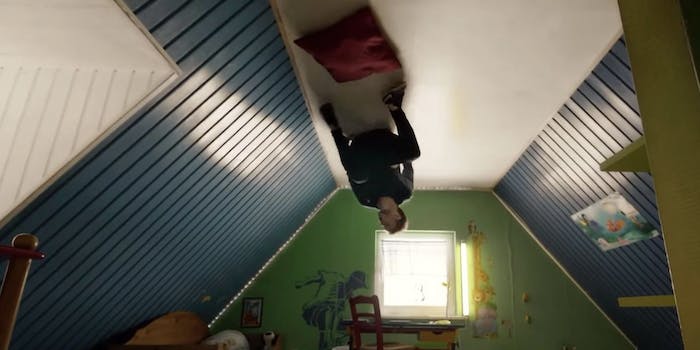 Is this crazy trickster the 'Trainspotting' baby grown up?

If you’ve ever seen the ‘90s classic Trainspotting, one scene was permanently seared into your memory: Ewan MacGregor’s withdrawal-induced fever dream. The surrealist vignette is charged with drama, tension, and thumping pulse of electro music; but it also contains the wildest use of baby in a motion picture of that time. The baby crawled across the ceiling, haunting McGregor’s character throughout his nightmare.

Since the film, McGregor’s seen his share of success, but whatever happened to that baby?

In a new video released by Red Bull, professional “freerunner” Jason Paul shows that he may have been that baby. The video shows Paul running and flipping across ceilings and walls, not dissimilar from the scene in Trainspotting. This must be the kid.*

*Upon cursory Google search, we discovered that Jason Paul was born in 1991, five years before the release of the Danny Boyle film.