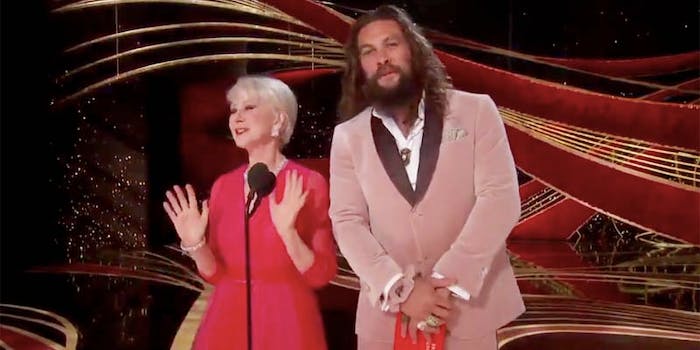 Aquaman made a splash.

“Honestly, I swear to god, Jason and I did not coordinate our outfits tonight, this is purely accidental,” quipped Mirren onstage. “But you know, it just goes to show, doesn’t it, that these days, a Hawaiian god and a very mature English woman can actually wear the same color—we can both wear pink.”

The award ultimately went to Free Solo, the film that follows the death-defying journey of rock climber Alex Honnold, who scaled the El Capitan rock formation in Yosemite National Park without the use of a harness or safety ropes.

That’s not what got people talking, however, because in addition to coordinating his outfit with his lovely wife, Lisa Bonet, Momoa paired his lewk with a matching pink scrunchie. Once a staple of teen ’90s fashion, the accessory now lends itself perfectly acceptable to tame the flowing tresses of none other than Aquaman himself.

It takes a real man to be comfortable enough with his masculinity to bring a scrunchie to the most prestigious film awards ceremony in the world, and suffice to say people were definitely into it.

always match the scrunchie to the suit pic.twitter.com/UWLLwXm8UE

My best dressed at #Oscars19 is this pink velvet scrunchie on Jason Momoa thanks and good night pic.twitter.com/u1xypzP1jE

It's come to my attention that Jason has a matching velvet mauve scrunchie around his wrist…… Fendi thinks of everything pic.twitter.com/t4nh9ry9i9

Although the scrunchie in itself is pretty impressive, nobody even though to mention the likewise coordinating pink clutch. What Momoa even needs to carry with him in a man-purse is regardless, as we shouldn’t question a clearly burgeoning style icon.