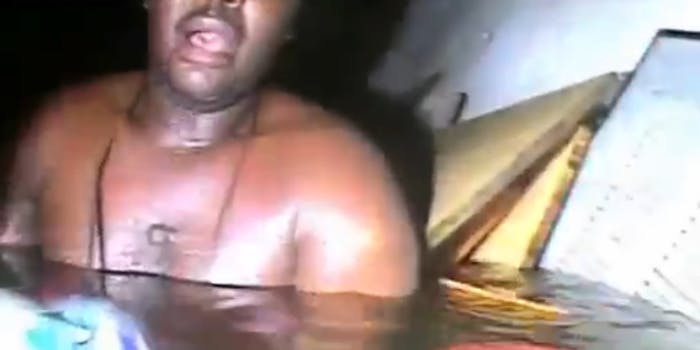 Watch a body-retrieval mission miraculously turn into a rescue

Early in the morning of May 26, a tugboat called the Jascon 4 capsized during a storm. There was one survivor—and no one knew it.

Early in the morning of May 26, a tugboat called the Jascon 4 capsized during a nasty storm. The boat sank 30 meters under the sea off the Nigerian coast. Almost every crew member died soon after Jascon 4 went under. Harrison Okene, the ship’s cook, survived.

Okene sat cold and terrified in a tiny, pitch-black, four-foot air pocket he’d found through sheer luck. For almost two days, he lived in a toilet stall, seeing nothing and hearing the sound of the ocean and sea life swimming around him. He saw members of his crew get swept away and die right in front of him.

At various times through his ordeal, he heard noises that he identified as hungry fish eating the corpses of his crew. He could smell death around him. Divers missed the loud noises he made to attract their attention. By sheer luck, the second rescue attempt found him.

This video shows South African divers assigned to a body-retrieval mission that miraculously turned into a rescue. At 5:30 in the video, the diver finds Okene in the murky water when a hand reaches out and grabs him through the darkness. The diver screams and everyone is shocked.

After 60 hours under the ocean, divers fit Okene with an oxygen mask to bring him back to the surface. Media reports say he spent another 60 hours in a decompression chamber to return his body pressure to normal. Otherwise, he would have died from the bends once he reached the surface.

“I was so hungry but mostly so, so thirsty,” Okene later told Reuters. “The salt water took the skin off my tongue.”