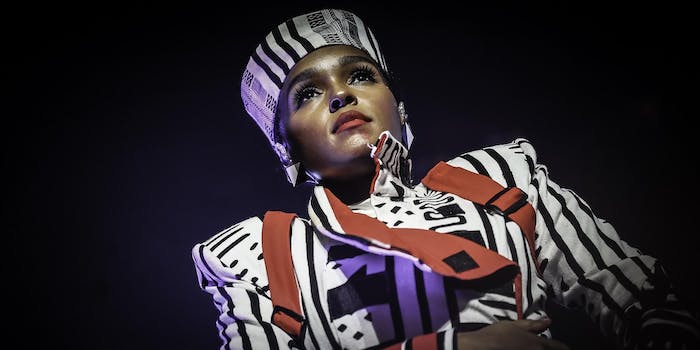 Who should play the Goblin King in the ‘Labyrinth’ sequel?

Janelle Monáe is a fan-favorite choice, but we don't know if the new film will feature the character.

Not for the first time, there’s a new Labyrinth movie in the works. And thanks to the original film’s cult status, there’s one burning question on every fan’s lips: Who will play Jareth the Goblin King?

Jareth was, of course, originally played by David Bowie. Released during the heyday of pre-CGI Hollywood fantasy movies, Labyrinth was a unique mix of kid-friendly muppets, grotesque fairytale fantasy, and unexpected sex appeal. David Bowie’s Goblin King was a defining childhood crush for many. A handsome, mysterious, menacing figure who shared a complicated psychosexual dynamic with the film’s teen heroine, Sarah (Jennifer Connelly). It’s hard to imagine anyone else taking on the role, but over the past few years, one particular name has become a fan-favorite choice: Janelle Monáe.

If you wanted to just have a direct continuation of Bowie’s role, you could cast Tilda Swinton. But in terms of current pop-culture relevance, Monáe makes far more sense.

Janelle Monáe is a multi-hyphenate singer/actress/entertainer with an effortless sense of cool. She’s a queer celebrity who crosses over from children’s entertainment to sophisticated adult sci-fi storytelling. She’s known for her distinctive, gender-nonconforming style. Much like Bowie, her personal brand is distant and glamorous enough to fit Jareth’s enigmatic-yet-melodramatic role. And by recasting Jareth (or Jareth’s successor) as a Black woman, you put a whole new spin on the character. It’s far more interesting than running the risk of something like Solo: A Star Wars Story, forcing a lesser-known actor to echo an iconic performance.

One of the other popular suggestions is Jennifer Connelly, who is now 49 years old and starring in the Snowpiercer TV reboot. Given that the original Labyrinth was all about flipping the power dynamic between the manipulative antagonist and the naive young heroine, this would be a clever way to position a Labyrinth sequel without having to recast Jareth at all. You just get Goblin Queen Sarah instead.

Doctor Strange director Scott Derrickson is onboard to direct the new Labyrinth movie, with a script from Maggie Levin (Into the Dark). This is the second recent attempt at a sequel, following the 2016 announcement of a film written by Nicole Perlman (Guardians of the Galaxy) and directed by Fede Alvarez (Don’t Breathe), which clearly didn’t pan out.

As a cult favorite with decades of dedicated fandom behind it, Labyrinth is a tempting choice for a new reboot or sequel. But that fan-following comes with high expectations, particularly when it comes to casting. So far, the new Labyrinth creative team hasn’t revealed whether Jareth will actually be in the film at all.