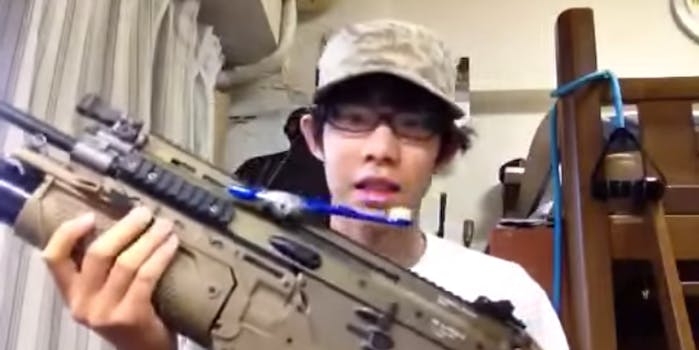 Brushing your teeth with a machine gun is now a thing

He'd be better off doing nothing.

Are you bored with brushing your teeth everyday? There is a simple, but somewhat dangerous, solution to that—just add guns.

One Japanese teenager has an entire YouTube channel devoted to reinventing the mundane task of dental hygiene. All it takes is a gun (probably an airsoft pistol, according to one redditor), a toothbrush, tape and, of course, toothpaste.

If it seems completely insane to you, well… you’re right.

It’s amazing that this kid still even has his teeth. Fortunately for his chompers (and his dentist bill), Mr. Gun Teeth has a sporadic video posting schedule.

This is probably one lifehack you won’t want to try.