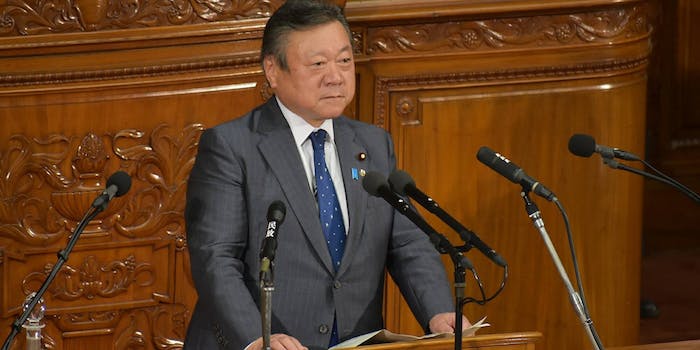 Ah, another government at its most competent.

Japanese politician Yoshitaka Sakurada serves as deputy chief of Japan’s cybersecurity strategy office. As minister for the upcoming Tokyo Olympics, Sakurada also leads the government’s efforts to protect the Olympics from hacking attempts and other technological vulnerabilities. Yet his role as deputy chief seems more administrative than anything else—as he told a fellow lawmaker in the Japanese House of Representatives, he simply doesn’t use computers. That’s his staff’s job.

“Since I was 25 years old and independent, I have instructed my staff and secretaries,” Sakurada told another politician on the House floor, according to Kyodo News. “I have never used a computer in my life.”

Sakurada went on to stress that cybersecurity is “a matter that should be dealt with by the government as a whole,” and that he’s “confident that I am not at fault.” That said, Sakurada had issues identifying whether USB drives were used in Japan’s nuclear power plants, leading to further concerns that Japan’s head of cybersecurity lacks the basic knowledge necessary to protect Japan during the upcoming Olympics.

Twitter users have another perspective on the matter. Perhaps Sakurada’s Luddite ways are the perfect cybersecurity measure. If you never use a computer, you can’t get hacked, right?

Alternative headline: Japan's minister in charge of cybersecurity has never been hacked.

You can't get hacked if you don't use computers lol https://t.co/2QmnS9LYtD

Can't get hacked if you don't have a computer pic.twitter.com/lVz8sI8I9p

isn't that the BEST way to protect yourself from computers!?!?!? https://t.co/A4rkfm21Rb

Yeah. Never using a computer is certainly the most effective approach against cybercrime #irony https://t.co/ShADqvj3fF

Sakurada seems to not have any first-hand experience for the job he was given, which is classic government bureaucracy for you. Twitter appreciates the Kafka-esque nonsense.

Dudes not logged on at all, but getting paid to be. Fucking living the dream

This is truly a banner day for the world's political class https://t.co/adlCajjnTn

Sending my resume out to several jobs I have no business doing ASAP pic.twitter.com/0WJXVCQKyp

Not that the U.S. federal government is any stranger to incompetency. HUD Sec. Ben Carson and his wife Candy Carson reportedly chose a $31,000 dining set for the department’s office, and Education Department Sec. Betsy DeVos knows very little about basic sexual assault statistics. A few Twitter users think Japan is taking a page from the Trump administration and putting politicians in charge of tasks they’ll surely botch.

Relax, it was a Trump staff recommendation and appointment…

WOW! It's like they are learning from the Americans!

It's okay, the US president has never had any political nor military experience

At this rate, the Japanese government may just elect Donald Trump as prime minister in 2021. At least he could teach Sakurada a thing or two about Twitter.