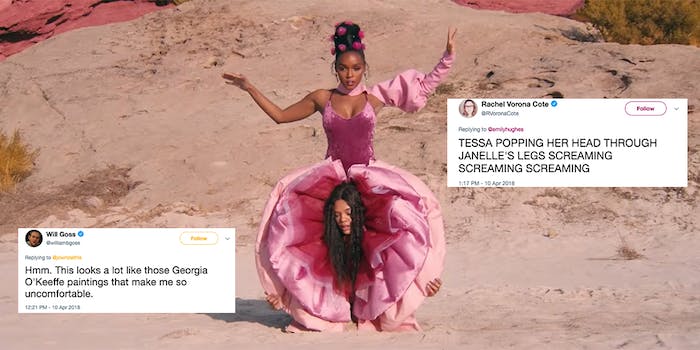 Janelle Monáe—the self-proclaimed part-human, “part-android” who’s as inscrutable as she is mesmerizing—released a new rose-tinged music video for her single “PYNK” on Tuesday.

Featuring Grimes, the song is an upbeat celebration of feminine power. The video explodes with shades of pink in many forms, from grapefruits to cats to donuts. But people zeroed in on one image in particular.

It’s Monáe, clad in pants that are unmistakenly meant to look like labia.

Cause of death: the single artwork for 'Pynk' by Janelle Monáe. pic.twitter.com/ZtkF4iHlqn

Who wore it better? janelle monae or me in college? pic.twitter.com/9fy44Brb3N

Hmm. This looks a lot like those Georgia O'Keeffe paintings that make me so uncomfortable.

It gets better: At one point in the video, Tessa Thompson peaks out between Monae’s pink, ruffly legs. The shot boosted speculation that Monáe and the actress are dating.

The world: I mean we don't KNOW that Janelle and/or Tessa are queer and/or together.
Janelle Monae: Here is a video in which Tessa literally peers out from my vagina. pic.twitter.com/1OHWh7t8az

Us a couple of months ago: omg do you think Janelle Monae and Tessa Thompson are dating
Janelle now: pic.twitter.com/f8Bt2qyJr5

In general, the video and its imagery are being hailed as a symbol of queer friendship and (maybe) love.

Everyone: "omg Make Me Feel is the queerest shit I've ever seen"
Janelle Monae: "lemme hold my own beer"https://t.co/fsFo7Pgh3O pic.twitter.com/uDrWVeHNdg

And like a glass of pink lemonade on a sweltering summer day, it’s just what we needed.