OKCupid isn't the only way to meet people online. There are also, for example, Craiglist writing gropes—er, groups.

Dating action isn’t, of course, confined to designated dating sites. In between bouts of therapy giving, denial enabling, and awkward, awkward dating, I was also meeting people in places I didn’t expect… and getting propositioned in very unexpected ways.

Since the breakup of a very long term relationship, I had been exploring my personal interests without compromise for the first time. It was exhilarating and scary, kind of like starting school all over again. One of the things I did was to join a writing group I found on Craigslist. It sounded like everything I was looking for: open, friendly, low-key, and non-judgmental about the level of commitment required. It would turn out that those traits applied to more than the writing group.

For my first meeting, I gathered notebooks and a pencil case packed full of gel pens, de-frizzed my hair as best I could, and scampered off to meet everyone (it really was like the first day of school).

Outside the building, I buzzed up to the apartment and waited. What was a polite amount of time to wait before buzzing again? A minute? Five minutes? It couldn’t be more than five minutes, could it? For some reason, I looked up and down the street, like someone was going to walk by and tell me what to do. I took a deep breath and buzzed again. 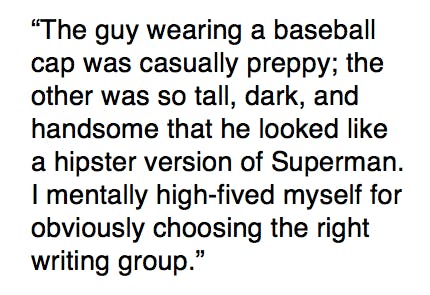 No answer. After another long minute, I got annoyed and buzzed a few times in a row before I realized that it would be wise to double-check the writing group email before I got arrested for harassing an innocent neighbor. My phone buzzed. I had mail. “It’s beautiful out! Come up to the roof, front door’s propped open in case anyone comes late.”

Oh—the building door had been open the whole time. The foyer was cool and dark after the bright sunshine, and I felt a little dazed as I walked over to the elevator. Halfway up the building, the elevator paused to let two attractive guys on, and then continued up to the top. One of the men looked at the notebook in my hand and guessed, “Here to write?” I nodded and they grinned, introducing themselves as the organizers of the group. The guy wearing a baseball cap was casually preppy; the other was so tall, dark, and handsome that he looked like a hipster version of Superman. I mentally high-fived myself for obviously choosing the right writing group.

On the roof, there were about a dozen people in various stages of writing, sunbathing, and marveling at the view. Introductions were made all around, Instagrams were taken of the cityscape, and some deep soulful writing was accomplished (I may have been writing Hipster Superman’s name over and over inside bubbly hearts, it’s hard to say). Both he and Casual Preppy made sure I was comfortable throughout the day. Writing group = win.

After a few more meetings, I began staying later to join the core, “regular” writers for food and drinks. Hipster Superman began to flirt with me: sitting next to me at dinner, placing a hand on my knee or shoulder lightly when we spoke, and leaning his head familiarly against me occasionally while we were writing.

It felt like we were building up to something more than friendship, and I was excited about it. To be honest, it felt more romantic because we hadn’t met through a dating site, regardless of the fact that I’d found this group online.

And then, one day, we had The Talk. He held my hands tenderly, looked deep into my eyes with an intense smoldering masculinity, and told me that he liked me. I nodded, ready to tilt my head back and swoon as he ravished me, but he was still talking. “Do you know about polyamory?” 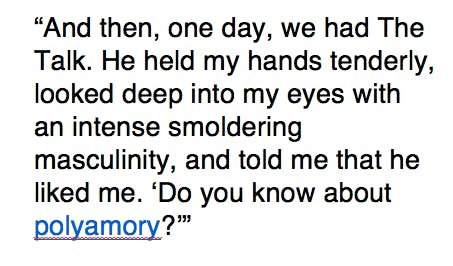 Hipster Superman continued with a well-rehearsed speech about the finer points of his lifestyle (love-style?): that it’s a committed relationship with more people involved, that the community was supportive and loving, and that it was more true to human nature than monogamy.

I sighed and tilted my head. He was still holding my hands and gazing into my eyes. Why did he have to be so damn handsome? An errant lock of wavy dark hair draped over his forehead, begging me to smooth it back, but doing so would have implied I was saying yes. I knew I wasn’t saying yes.

Reluctantly, I slipped my hands free and told him I’d have to think about it. That part was a lie. I didn’t have to think about it at all. I was an only child, through and through. There were epic tales from my childhood of the damage I’d inflict on people who dared to touch one of my toys. I shuddered to think of what would happen if I had to share a man. But saying I needed time to think was an easy way to prolong our flirtship.

Several days later, his friend, the Casual Preppy, emailed me to ask if I’d like to attend a “naked party.” Wow. I guess not saying no immediately to polyamory opened the floodgates to more exploratory propositions. “No thanks,” I replied quickly, eager to shut down this new development.

Within an hour, Hipster Superman texted to check if I was still thinking about things, and I turned him down as well, as nicely as I could. While I wasn’t interested, I didn’t want to hurt their feelings. It just definitely wasn’t for me.

Even though I hadn’t been seeking a polyamorous relationship or naked party invitation, it was good to discover that I didn’t need to be on an official online dating site to meet interesting men. It was a reminder to venture outside of the OkCupid bubble and be open to all sorts of possibilities, online and off. In the end, though, I wasn’t quite as open as what they wanted; so I never returned to the writing grope—er, group.