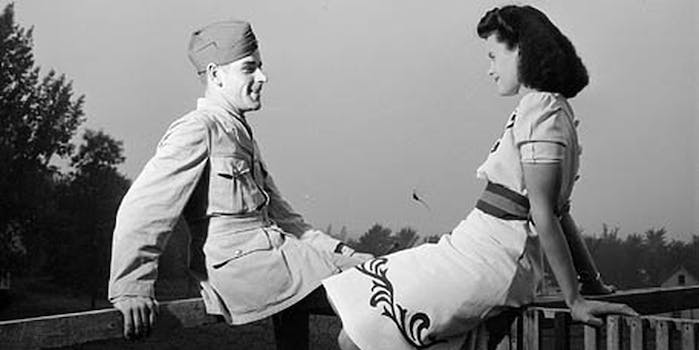 Jane Dates: How about we… get a little better at this?

Things take a turn for a better after Jane tries a new dating site.

My brush with the libidinous writing group had reminded me that there was a whole wide world outside of OkCupid, so I ventured onto HowAboutWe to give things a try on another type of dating site.

The basic setup was similar: name, age, pictures, and stats, but this site had a different way to browse potential mates. People could post date ideas beginning with the phrase, “How about we…” What a fun concept! Even if I didn’t fall in love, I could at least do something I liked (i.e., not be trapped at a dinner table giving amateur therapy sessions).

As I began browsing, the vast range of suggestions was astounding. My inner (not-so-hidden) grammar snob delighted in ruling out guys who couldn’t grasp the simple concept of forming a complete sentence. A gal’s gotta have standards. But beyond that baseline rule, I was determined to be open-minded.

“How about we… grab a coffee and people watch in Union Square?” sounded promising, until I kept scrolling down the list of posted ideas. About one of every five was a variation on that suggestion. I added originality to my criteria.

“How about we… browse books at the Strand?” That one definitely spoke to my inner (not-so-hidden) nerd. I gave the guy’s profile a once over and approved. He looked athletic, had a nice smile, and rambled about the philosophy of Foucault in his profile. Dreamboat!

The site offered two ways to tell Dreamboat Philosopher that I liked his idea: click a large “I’m intrigued” button, or write him a personal message. I took the easy way out, clicked the button, and waited. Perhaps I’d shopped too much on Amazon, but I assumed I could just add an interesting date to my cart, checkout, and get free overnight delivery. More than a week went by without a response, and I realized that this would take a little more work than online shopping.

“Be bold,” my friend the Dating Veteran advised. “You have nothing to lose.” A quick scan of my inboxes on both OkCupid and HowAboutWe supported her statement. It was worse than having nothing to lose: I desperately needed to lose those deadbeat suitors. Time to be bold.

I sat at my keyboard, staring at the screen. The cursor blinked apologetically in the HowAboutWe text box for proposing a new date. It was suddenly a lot harder to be judgmental about syntax and originality now that I was confronted with the challenge of conveying wit, charm, and creativity with one short sentence. 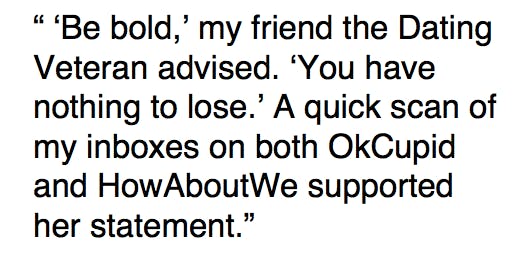 No wonder some guys had opted to post such gems as:

“How about we let’s just meet.”

“How about we please, oh God, please someone write to me!”

Ok, I made that last one up, but just barely. All I really wanted to do was grab a coffee and people watch in Union Square, just like everybody else. But no! I needed to be bold.

A line from the original Batman movie popped into my head, and I excitedly typed it in. “How about we dance with the devil in the pale moonlight?” Sure, I paraphrased a smidge, but I think Jack Nicholson would have been proud. Heart pounding, I posted my date. Would people get it? Would they respond? Would anyone even see it? Before I even finished asking myself these questions, responses of all kinds started pouring in.

Now I saw firsthand why pressing the robotic “I’m intrigued” button had no result. I’d put myself out there, and it was scary. If a guy couldn’t do the same thing in a private message, it was a turnoff. Being bold was teaching me some valuable lessons.

I turned my attention to the human-generated messages. A bunch of astounded geeks greeted me (a Geek Chorus!) with exclamations of, “Batman!! I can’t believe you quoted Batman!” I basked in the warm glow of their attention and began browsing the profiles of my admirers. Not my type, not my type, not my type… Damn! However nice the flood of admiration was, I needed to feel a frisson of attraction for it to lead anywhere.

On the heels of the Geek Chorus, a second wave of messages flooded in. These were from men who either didn’t get or didn’t care about the Batman reference. The standouts of this bunch included the gentleman who paraphrased my post to ask, “Ever wanna dance with my dick??”; the one who complimented my linguistic skills with an adroit “hahaaa, you poetic girl, lez do it”; and yes, the Satan worshipper who was convinced we were evil soulmates. God bless the block button.

Amidst this gloriously horrific hailstorm, one promising message appeared in my inbox. “Cool quote. Are you a film buff, dancer, or both?” It hit all the right notes: gave the Batman reference a nod without gushing, refrained from invitations to touch his penis, and opened the door to a real conversation. I held my breath as I checked out his profile. Please be cute, my inner (not-so-hidden) snob begged.

Hallelujah! He was attractive and interesting: web developer by day, musician by night, and just tatted up enough to be hot without slipping into carnival sideshow territory. “I’m intrigued!” my brain screamed.

We settled on meeting at a casually chic bar that served both cupcakes and liquor late into the night. As our night approached, I experience traumatic flashbacks to less successful dates. What if he wasn’t as cool in person as he was online? What if I’d gotten it all wrong again?

To my surprise, however, I wasn’t all that scared. I wouldn’t opt for a bad date over a good one (who would?), but it also wouldn’t kill me to put up with an awkward situation for an hour or two. Turned out online dating was good training for being a grownup about these sort of things.

I dressed with care (he was a hot musician, after all) and sallied off to meet him. As I walked in the door and spotted him at the end of the bar, a big smile rose to my lips spontaneously. He smiled back broadly as I walked over. That set the tone for my most successful date so far.

We had a couple of drinks, chatted as easily in person as we did online, and shared a really nice kiss at the end of the night. Not a tentative peck like Normal Guy, but a deep passionate kiss that made me lean into his body as he held me. We parted reluctantly, with plans for a second date.

In between taking risks and tempering my relationship-honed impulses to be too generous with my time and attention—without stifling my personality—I’d found the right balance. I think I might finally be getting the hang of this crazy thing called online dating.