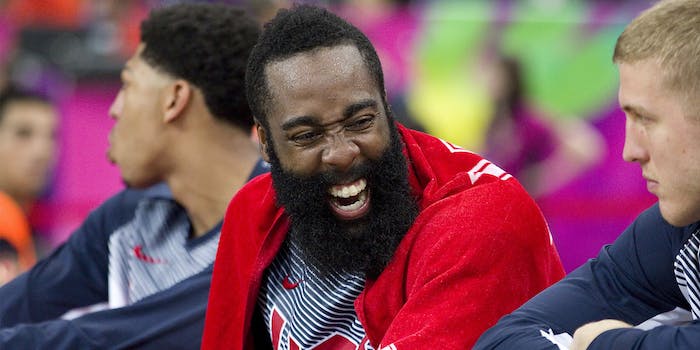 'Houston, we have found the problem.'

Thanks to the shockingly thorough research done by Reddit user AngryCentrist, we may have discovered why Harden’s performance varies so much from city to city. According to their research, Harden’s performance is directly correlated to the quality of strip clubs in the host city.

Harden, of the Houston Rockets, reportedly has an affinity for strip clubs. According to the redditor’s post, his enjoyment of them is well-known among fans. A 2017 Complex story even revealed that a Houston strip club honored the 30-year-old athlete—and his exorbitant spending—by hanging up one of his jerseys. The redditor dove into their research after watching the Rocket’s “dismal performance in Miami last week,” and quickly discovered that their suspicions were onto something. (Miami is long-known for being a black hole for visiting athletes; gamblers jokingly call their party-specific hangovers the “Miami flu.”)

The research was all based around a simple hypothesis, outlined by AngryCentrist in true scientific form. “James Harden’s box score declines in cities with high quality strip clubs,” the hypothesis postulates. AngryCentrist then went to work, comparing Harden’s performance to the quality of strip clubs in each city he’s played in. The redditor apparently put some serious time into their research, but their findings were well worth it.

In the post, they outlined their methodology, as well as the conclusion their research led them to. Under methodology, AngryCentrist explained that they “extracted all of James Harden’s game logs for the past 4 seasons from Basketball Reference, cleaned up the data a bit (a bunch), and appended it into a single worksheet.”

They then filtered out home games and any instances in which Harden did not participate. The definition of poor performances was quite precise. Points, field goal, free throw, and 3-point percentages were all considered, as well as assists and turnovers. For each stat, AngryCentrist compared “Harden’s overall season average to the city-specific season average.” They classified poor performance in two categories: sub-par and very sub-par. To fall into the “very sub-par” category, Harden had to perform “20%+ WORSE than season average.”

The redditor then compared these stats across 28 NBA cities, excluding Houston. They then researched the strip clubs in each city, based on Google user reviews. The final step was to “put the City Strip Club Rating into the pivoted game log data, performed a regression analysis and visualized it into charts,” which honestly is completely over my head.

The resulting charts, however, were immensely informative.

The research seems to readily reveal that a good strip club inspires Harden to stay out far too late the night before a game. AngryCentrist’s research quickly shot the post to virality. It has been making waves online since AngryCentrist first posted their research on Thursday. Comments on the post vary between amusing commentary on the findings and awe at the work AngryCentrist put into it. “Houston, we have found the problem,” one commenter quipped. “This work belongs at the Sloan Conference. 2020 keynote address by u/AngryCentrist,” another said.

The conversation spread from Reddit to the rest of the web where it quickly gained the attention of several high-profile people. Darren Rovell of the Action Network tweeted screenshots of AngryCentrist’s work. “A reddit user found a correlation between James Harden’s lack of performance on the road and the quality of strip clubs in that city,” he wrote. The conversation blew up from there.

A reddit user found a correlation between James Harden’s lack of performance on the road and the quality of strips clubs in that city…. pic.twitter.com/xWg0awhp6K

In the team photo for best reddit posts ever.https://t.co/b4NOEoD0Gd

Also, this is the only science I care about. Now and forever. https://t.co/N6FC8rviap

Whether or not the Rockets will take AngryCentrist’s work into consideration has yet to be seen. While the team would likely be well-served by preventing Harden from visiting strip clubs, we imagine he wouldn’t be thrilled by the decision.