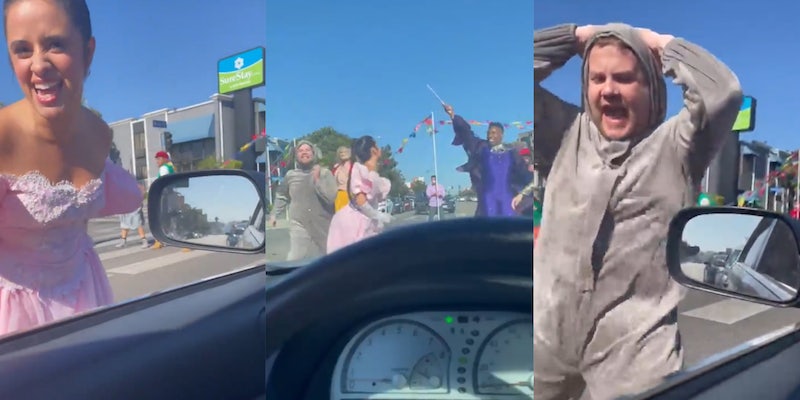 James Corden’s ‘Cinderella’ flash mob is getting dragged on Twitter

A video filming the segment from one of the cars went viral.

Later this week, Amazon Prime Video is debuting Cinderella, a modern, jukebox musical starring Camila Cabello, Idina Menzel, Minnie Driver, Pierce Brosnan, Billy Porter, and James Corden. Thanks to The Late Late Show, we got a glimpse of one of the songs on the soundtrack in the most unexpected of places.

According to a press release from CBS, Cabello (who plays Cinderella in the film) is set to chat with Corden on The Late Late Show on Monday night. For her appearance, The Late Late Show is bringing out the big guns with “Crosswalk the Musical,” one of the show’s recurring segments in which a flash mob descends onto a crosswalk to stop traffic while performing songs in costume. Joining Cabello (Cinderella) and Corden (James the footman and mouse) for the segment are Menzel (Vivian, the evil stepmother) and Porter (Fab G, Cinderella’s fairy godparent).

The segment has yet to air, but how do we know this? Because over the weekend, someone who was caught in one of the flashmobs recorded the Cinderella cast performing “Let’s Get Loud” (which appears on the Cinderella soundtrack) in front of their vehicle.

A Cabello stan account posted another angle of the Cinderella flash mob recorded from the side of the road.

And someone else caught the end of the flash mob as the cast and ensemble took their bows.

The original clip from @_BlueAnt has been viewed more than 18 million times since Saturday and has gone viral thanks in part to the Film Updates Twitter account reposting the video. And sure, we’ve seen these types of flash mob musicals on The Late Late Show for years but rarely do they come from the POV of the unsuspecting audience who tried to drive somewhere and was treated to a musical instead.

While fans of certain actors and musicians might love being stuck to watch them perform, the experience otherwise looks like hell, and the jokes—which ranged from having to explain being late to work because of a flash mob to darker references to hitting the gas pedal—didn’t hold back.

There was even an edit of the footage involving a vastly different song that gave the footage an even creepier feel.

But much of the ire and jokes were directed towards Corden himself.

The attacks on Corden come twofold. On one hand, Corden has been incredibly busy lately. Along with hosting The Late Late Show, Corden starred in a number of musicals (Into the Woods, The Prom, Cats), voiced animated characters (the Peter Rabbit movies, the Trolls movies, The Emoji Movie), hosted big events (Tonys, Grammys, the Friends reunion special), and showed up in smaller roles in other movies (Oceans 8, Yesterday). So, with all of that plus Cinderella, the “Crosswalk the Musical” segment feels particularly obnoxious.

But the other reason that many online take issue with Corden is the perceived notion—based largely on anonymous accounts shared online—that Corden is something of an asshole off-camera. A 2019 Reddit AMA went off the rails after redditors used the post to ask Corden about many of those transgressions and writer Jack Allison claimed that Corden showed up at a Writers Guild meeting without his show’s staff “to advocate for a lower pay grade for late night writers” (which Corden has denied).

Cinderella will debut on Amazon Prime Video on Friday, Sept. 3.